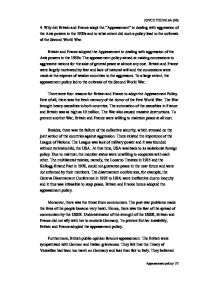 4. Why did Britain and France adopt the “Appeasement” in dealing with aggression of the Axis powers in the 1930s and to what extent did such a policy lead to the outbreak of the Second World War.

Britain and France adopted the Appeasement in dealing with aggression of the Axis powers in the 1930s. The appeasement policy aimed at making concessions to aggressive nations for the sake of general peace at almost any cost. Britain and France were largely motivated by fear and lack of national will and the concessions were made at the expense of weaker countries to the aggressors. To a large extent, the appeasement policy led to the outbreak of the Second World War.

There were four reasons for Britain and France to adopt the Appeasement Policy. First of all, there was the fresh memory of the horror of the First World War. The War brought heavy casualties to both countries. The summation of the casualties in France and Britain was as high as 10 million. The War also caused massive destructions. To prevent another War, Britain and France were willing to maintain peace at all cost.

Besides, there was the failure of the collective security, which stressed on the joint action of the countries against aggression. There existed the impotence of the League of Nations. The League was lack of military power and it was founded without its brainchild, the USA. At that time, USA was back to its isolationist foreign policy. Due to mistrust, the member states were unwilling to cooperate with each other. The multilateral treaties, namely, the Locarno Treaties in 1925 and the Kellogg-Briand Pact in 1928, could not guarantee peace in the near future and were not enforced by their members. The disarmament conferences, for example, the Geneva Disarmament Conference in 1932 to 1934, were ineffective due to inequity and it thus was infeasible to keep peace. Britain and France hence adopted the appeasement policy.

Moreover, there was the threat from communism. The post-war problems made the lives of the people became very harsh. Hence, there was the fear of the spread of communism by the USSR. Underestimated of the strength of the USSR, Britain and France did not ally with her to encircle Germany. To prevent further instability, Britain and France adopted the appeasement policy.

Furthermore, British public opinion favours appeasement. The British were sympathized with Germen and Italian grievances. They felt that the Treaty of Versailles had been too harsh on Germany and less than fair to Italy. They believed that war, the ultimate evil must therefore be avoided at all coats by peaceful elimination of German and Italian grievances. The British ruling class preferred appeasement too as they were not willing to fight a war for the sake of others. Britain alone was neither willing nor capable of shouldering international obligations to check aggressions. As a result, she carried out the appeasement policy and France followed her.

The appeasement policy marked the collapse and abandonment of the doctrines of collective security, and such policy led to outbreak of the Second World War to a large extent. Due to the adoption of the appeasement policy, Britain and France did not bother the Germen rearmament in 1935. When Fascist Italy invaded Abyssinia in 1935, Britain only adopted half-hearted sanction, Hitler therefore noted the passivity of the Western powers and strengthen his will in adopting the expansionist foreign policy. Besides, the Germen remilitarization of Rhineland in 1936 was not interrupted by Britain and France. It was a huge gamble as Britain and France could launch 90 divisions. Lord Lothian of Britain commented that, ‘after all they are going back into their back garden.’ This further encouraged the aggression of Nazi Germany.

With the success of 1935 and 1936 to boost him, Hitler turned his attention to Austria. He insisted the reunion of Austria and the Austrian Chancellor Schuschnigg asked France and Britain for help but was refused. British Prime Minister, Chamberlain felt Austria and Germany had a right to be united and the Treaty of Versailles was wrong to separate them. Britain’s Lord Halifax had even suggested to Hitler that Britain would not resist Germany united with Austria. As a result, with no confrontation, Anschluss was completed in 1938. Hitler then moved this attention to Czechoslovakia. Germany annexed Czechoslovakia in 1938, which was the strategic keystone of Europe. Chamberlain referred the Czech crisis, “a quarrel in a far away country between people of whom we know nothing about”. He believed that in the interests of European peace, the Czechs must be coerced or abandoned. This marked the height of the appeasement policy.

After Hitler’s annexation of Czechoslovakia, Britain announced that she would give military guarantees to Poland, Rumania and Greece. In April 1939, Hitler demanded Poland to return Danzig and the Polish Corridor. Britain put pressure on the Poles but Poland still refused to do so. As a result, Hitler attacked Poland in September 1939. Germany now had 103 divisions and 3000 planes, which was far more than Britain and France. To avoid war, Chamberlain said if Germen troops were withdrawn, a conference would hold to discuss the issue. Hitler however gave no reply. Britain and France hence declared war on Germany. This marked the end of appeasement policy and the outbreak of the Second World War.