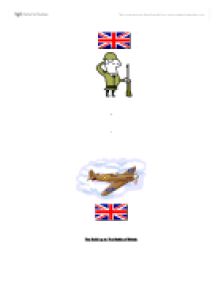 The Battle of Britain

The Battle of Britain The Build up to The Battle of Britain By the August of 1932, the National Socialist German Workers' Party, had massed over 400,000 members, and it was not uncommon for Hitler to give speeches to audiences of in excess of 100,000. Hitler promised that he would take Germany out of the great depression it was in, he promised employment, an increase in manufacturing, and above all, he promised that Germany would once again be a world power. By 1933, the Nazi party constructed the first concentration camp at Oranienburg just outside Berlin. He attained total power by bypassing the Enabling Act allowing to the Nazi Party to rule by decree and thus the democratic system was abolished with the Nazis having complete power, and the Third Reich was born. Most of the following years until 1937 were spent on domestic issues within Germany. By 1935, all German Jews had to give up their rights of citizenship. They were also forbidden to marry, and it was illegal for them to have any form of sexual relationship with people of German heritage that had blonde hair and blue eyes, who were acknowledged by Hitler as being part of a super race (Aryans). Jewish shops and businesses were outlawed, and in the years to follow the Jews were made a mockery of by the painting of slogans on the walls of Jewish homes and places of business. The rallies and speeches continued from Hitler. Every speech was greeted with thousands of cheering and chanting followers. In 1933 he said to them that if a country would require 200,000 soldiers, them Germany would have 600,000, if a country would require 2000 ships, then Germany would build 6000, and if a country would require 3000 planes then Germany would have 9000 planes. It seemed as if Hitler had this habit of multiplying everything by three. ...read more.

France was fast becoming a beaten country and headlines around the world were highlighting the German performance...and the Allied demise. By May 26th1940, it was obvious that evacuation was definite. The German forces now occupied a half moon area around the Dunkirk region. Lord Gort summoned Group Captain Victor Goddard to his Command Post at Pr�mesques and requested that he fly to London to attend a meeting with the Chiefs of Staff and present them with an overview of the present situation. Gort was under the impression that the Navy was sending just a few destroyers for any evacuation, so Goddard had to inform them that a much bigger operation would be required as there could easily be in excess of 250,000 tired and battle weary men that would have to be moved. It seemed apparent that Gort was not on the best of terms with General Sir John Dill, as he suggested that Goddard speak to Ironsides preferably in the presence of Sir Dudley Pound the Chief of Naval Staff. G/C Goddard made the trip in a damaged Ensign transport plane, first landing at RAF Manston, then after a brief stopover they flew on to RAF Hendon and thence by car to the meeting at Whitehall, where in the basement, with all the "brass" the war leaders of the Empire, and it has been said that Goddard made a fool of himself by speaking out of turn after the subject of Dunkirk had been officially finished. "......I am here on the representation of Lord Gort to say that the provision that you have made is not nearly enough. You have to send not only Channel packets, but pleasure steamers, coasters fishing boats.........everything, even rowing boats." The war leaders sat back in amazed, and stared at the Group Captain, all eyes has cemented themselves on him. Then someone took him by the arm and politely said "......come on now sir, you must leave now." ...read more.

They did great damage but the radar chain stayed intact and the airfields kept operating. Stukas, used in the first attacks, were so badly handled by the opposing Spitfires and Hurricanes that the Germans withdrew them and they never saw service over England again. It became a battle of attrition and not just in the air. The unsung heroes of Fighter Command were the ground crews who got the planes into the air, lived through the attacks on the airfields, came out and filled in the craters on the runways and were waiting for the fighters when they came back thirsty for fuel and hungry for more ammunition. Attacking the airfields was strategically and tactically the correct thing to do. Soon 11 Group was near to collapse. There were not enough pilots, not enough ground crew, never enough sleep and too many enemy planes. Then a German bomber being pursued by a British fighter jettisoned its bomb load over London. Churchill ordered retaliatory raids on German cities and an incensed Adolf Hitler ordered the Luftwaffe to switch its attacks to London and level the British capital. This gave the embattled 11 Group airfields a desperately needed breather. It also brought the fighters of 10 Group, based further north, into play and forced the Messerschmitts to go into combat at the extreme end of their range, something they had never been intended to do. As Londoners bore the brunt of the German bombs, the RAF regrouped and eventually repulsed the airborne assailants. As the summer drifted into autumn the tide and weather patterns changed and soon invasion was no longer a practical possibility. Hitler started to look eastwards for fresh conquests. The Luftwaffe had been given a bloody nose and never again launched an air offensive on anything like a similar scale. The RAF had been hurt but not broken. As the war progressed it grew in size and power and its bomber arm carried the war deep into the heart of Germany with greater devastation than anything ever visited on British cities. ...read more.