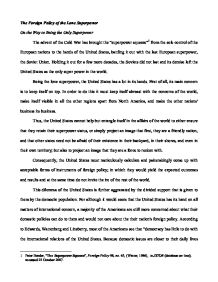 The Foreign Policy of the Lone Superpower On the Way to Being the Only Superpower The advent of the Cold War has brought the "superpower squeeze"1 from the sole control of the European nations to the hands of the United States, battling it out with the last European superpower, the Soviet Union. Holding it out for a few more decades, the Soviets did not last and its demise left the United States as the only super power in the world. Being the lone superpower, the United States has a lot in its hands. First of all, its main concern is to keep itself on top. In order to do this it must keep itself abreast with the concerns of the world, make itself visible in all the other regions apart from North America, and make the other nations' business its business. Thus, the United States cannot help but entangle itself in the affairs of the world to either ensure that they retain their superpower status, or simply project an image that first, they are a friendly nation, and that other states need not be afraid of their existence in their backyard, in their shores, and even in their own territory; but also to project an image that they are a force to reckon with. Consequently, the United States must meticulously calculate and painstakingly come up with acceptable forms of instruments of foreign policy; in which they would yield the expected outcomes and results and at the same time do not invite the ire of the rest of the world. This dilemma of the United States is further aggravated by the divided support that is given to them by the domestic population. For although it would seem that the United States has its hand on all matters of international concern, a majority of the Americans are still more concerned about what their domestic policies can do to them and would not care about the their nation's foreign policy. ...read more.

Instead of being seen as a war on religious fundamentals and extremists, some now see this act of the United States as a crusade for the regionas rich resources of oil and energy. As such, according to Roberts, one of the most fundamental roles of public diplomacy is to reduce this anti-American sentiment. He claims that the rise of anti-Americanism is the failure of the current government to utilize public diplomacy well15. Aside from projecting this image, the United States would also want to impose this image upon the other states, specifically to be a model that other states should emulate. They would want to export their values and ideals of democracy, freedom, free trade, human rights, values which are only functional if respected and adhered to by other nations of the world as well. For example, the ideal of capitalism and trade liberalization as accepted by the Americans would be useless if the rest of the world would adhere to communism for to whom would the Americans trade freely if their target markets would opt keep their economies to themselves and not reach out to other countries, such as the United States? This goes, too, to the other values that Americans hold dear. A third function that public diplomacy may serve for the United States government if for it to be a way of saving face in case of any embarassing incidents that may have occurred that could tarnish its image. Examples have been given by Patricia Karl's paper, "Media Diplomacy," one of which will be discussed later on in this paper. Forms of Public Diplomacy As cited in the Department of State's own definition of public diplomacy in its Dictionary of International Relations Terms, public diplomacy may take on various forms: publications, motion pictures, cultural exchanges, radio and television. Fulbright Scholarships It is notable that the the only non-mass media consummable form of public diplomacy is cultural exchanges, (which confusingly might still be transmitted through the media, if one so wishes). ...read more.

trying to prevent the previous race from doing so-somehow being the crusaders for the human race for they believe that "others should not pay for the mess that they have created." All of this because the Decepticons and the Autobots have destroyed their planet into pieces trying to assume supremacy over the other. With their planet gone, the Decepticons have been on a search as to which planet they should occupy, and unfortunately, they have chosen the planet Earth. This movie is replete with themes of American ideology and values as seen in the way that the screenplay was written. This movie has screened during which America was on a crusade against terrorism and was currently occupying Iraq, "on a mission to free the the Iraqi people", with George W. Bush at the helm. We may see that the characters in the movie may be likened unto real life characters or institutions. For example, the Decepticons may be attributed to the persona of Saddam Hussein, trying to take over a group of people for his own personal gain while the poor human race in the movie may be the Iraqi people. Meanwhile, the Autobots may be likened unto the Americans, trying to fight for the humans, fighting for a cause, fighting a war that does not even concern them, out of their nobility and manifest responsibility, being the only race that could match the Decepticons. Just like Bush's justification in going to war against Saddam Hussein, he claims that only he has the capability to stop Hussein and his plans of using his weapons of mass destruction. And so he, sends in his troops, fighting in the name of freedom and human rights, topple a regime, and "free" the Iraqi people. The Transformers movie came out at a time when the Bush administration was already being pressured by various lobby groups to pull out from Iraq. It may then be seen as a tool of somehow persuading the world, that America needs to be in Iraq, to ensure the freedom that is due all sentient beings. ...read more.