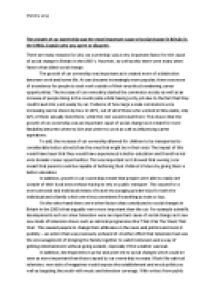 The growth of car ownership was the most important cause of social change in Britain in the 1960s. Explain why you agree or disagree.

﻿Melieha Long The growth of car ownership was the most important cause of social change in Britain in the 1960s. Explain why you agree or disagree. There are many reasons for why car ownership was a very important factor for the cause of social change in Britain in the 1960?s. However, as well as this there were many other factors that aided social change. The growth of car ownership was important as it created more of a distinction between work and home life. As cars became increasingly more popular, there was more of a tendency for people to seek work outside of their area thus broadening career opportunities. The increase of car ownership started the commuter society as well as an increase of people living in the countryside whilst having a city job due to the fact that they could travel into work easily by car. ...read more.

This caused for a more personal and individual means of travel encouraging private trips for both the individual and a family which were less convenient if travelling by train or bus. On the other hand there were other factors that contributed to social changes in Britain in the 1960s that arguably were more important than the car. For example scientific developments such as colour television were an important cause of social change as it saw new kinds of television shows such as satirical programmes like ?That Was The Week That Was?. This caused people to change their attitudes on the news and politics and mock it publicly ? an action that was previously unheard of. Another effect that television had was the encouragement of bringing the family together to watch television and a way of getting entertainment without going outside, especially if the weather was bad. ...read more.

This attitude brought about by ?the pill? was mirrored by fashions of the time which tended to accentuate sex appeal with the mini skirt being an example of this. Overall, while car ownership was a very significant cause of social change in Britain in the 1960?s it is just one of a range of other significant causes. Due to this I would not describe it as the most important. Mark Donnelly describes television as being the most important cause in his ?Sixties Britain? ?Television?s rise to become a near universal presence in people?s homes was the most important cultural transformation of the sixties?. I agree with this partially as television showed proof of a change in attitudes and lifestyles as people turned to staying in to watch television, enjoying satire, as well as advertisements promoting consumerism. Cars allowed for extended opportunities, the pill allowed for independence and liberation and the television demonstrated lighthearted satirical nature. All of these factors are important causes of social change in different ways and therefore none of them are more important than the others. ...read more.