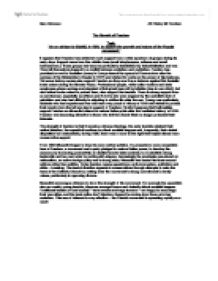 The Growth of Fascism - 'As an advisor to Giolitti, in 1921, to explain the growth and nature of the Fascist movement.'

The Growth of Fascism Task: 'As an advisor to Giolitti, in 1921, to explain the growth and nature of the Fascist movement.' It appears that Fascism has achieved much support from a wide spectrum of groups during its early days. Support came from the middle class (small shopkeepers, artisans and small businessmen.) These groups had become particularly destabilised by industrialisation and war. They felt themselves trapped in a conflict between socialism and capitalism. Fascism has promised an end to Socialism (many in Europe feared the spread of Communism after the success of the Bolsheviks in Russia in 1917) ...read more.

Young men particularly students who had experienced war and were very proud of victory of 1918 and wished to protect their country from the left are also in support of Fascism. Finally it appears that Nationalists support Fascism as Mussolini offered to restore Italian pride after the 'mutilated victory' of 1919. Fascism was becoming attractive to those who felt the Liberal State no longer protected their interests. The strength of fascism is that it remains a diverse ideology, the early fascists retained their radical idealism, the squadristi continue to attack socialist leagues and, frequently, their violent disposition but undoubtedly, during 1920, there was a move to the right that helped attract more conservative support. ...read more.

Mussolini had based his ideas around actions rather than politics. Today fascism means squadrismo, anti-communism, patriotism and strike - breaking. The fascist direction appeals to conservatives through attempts to calm the fears of the Catholic Church by making clear the movement's strong commitment to family values, particularly in opposing divorce. Mussolini encourages violence to show the strength of his movement. For example the squadristi, who are mainly young fascists, disperse amongst towns and violently attack socialist leagues. Traditional leaders of rural society - land owners and large farmers - are happy to encourage their new allies, and the local police don't interfere. Support is coming from those who fear socialism. This use of violence is very effective - the Fascist movement is spreading rapidly as a result. Sam Coleman AS History Mr Harrison ...read more.