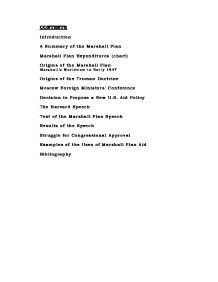 CONTENTS Introduction A Summary of the Marshall Plan Marshall Plan Expenditures (chart) Origins of the Marshall Plan Marshall's Worldview in Early 1947 Origins of the Truman Doctrine Moscow Foreign Ministers' Conference Decision to Propose a New U.S. Aid Policy The Harvard Speech Text of the Marshall Plan Speech Results of the Speech Struggle for Congressional Approval Examples of the Uses of Marshall Plan Aid Bibliography Introduction On June 5, 1947, Secretary of State George C. Marshall spoke at Harvard University and outlined what would become known as the Marshall Plan. Europe, still devastated by the war, had just survived one of the worst winters on record. The nations of Europe had nothing to sell for hard currency, and the democratic socialist governments in most countries were unwilling to adopt the draconian proposals for recovery advocated by old-line classical economists. Something had to be done, both for humanitarian reasons and also to stop the potential spread of communism westward. The United States offered up to $20 billion for relief, but only if the European nations could get together and draw up a rational plan on how they would use the aid. For the first time, they would have to act as a single economic unit; they would have to cooperate with each other. Marshall also offered aid to the Soviet Union and its allies in eastern Europe, but Stalin denounced the program as a trick and refused to participate. The Russian rejection probably made passage of the measure through Congress possible. The Marshall Plan, it should be noted, benefited the American economy as well. The money would be used to buy goods from the United States, and they had to be shipped across the Atlantic on American merchant vessels. But it worked. By 1953 the United States had pumped in $13 billion, and Europe was standing on its feet again. Moreover, the Plan included West Germany, which was thus reintegrated into the European community. ...read more.

Aid Policy By late April, dozens of public figures and commentators in addition to Marshall were calling for aid to Europe. Studies were already underway in the State Department that would help to lay the groundwork for a new American initiative to restore the balance of power in Europe. But Marshall and his advisers faced countervailing pressures. On the one hand, increasing misery and Communist voting strength in western Europe demanded speed and decisiveness from the Truman administration. On the other hand, domestic politics encouraged the administration to caution. While the reaction to the Truman Doctrine had generally been positive, there was a worrisome undercurrent of opposition to increased foreign aid, and not just from Republican party isolationists. Many Democratic congressmen warned that they would not stand for the presentation of another administration policy fait accompli like the Greece-Turkey aid package. State Department officials went out of their way to avoid any further hints that the United States would seek everywhere to resist communism or the Soviet menace. Marshall himself went to considerable lengths to stroke Senator Vandenberg's ego and to reassure him that no budget-busting programs were under consideration. By early May 1947, Marshall had decided upon a low-key approach to proposing American political-economic efforts in Europe. He suggested that he announce a new initiative at one of the graduation ceremonies that he was scheduled to attend. Acheson assured him that nobody paid any attention to what was said at those events, but Marshall knew that European leaders could be tipped off in advance to the importance of what he would say. Marshall first thought of announcing something at the University of Wisconsin on May 24; that venue had the advantage of bearding the very conservative and hostile Robert McCormick and his Chicago Tribune tiger in their Midwestern den. But key adviser William L. Clayton (Under Secretary of State for Economic Affairs) was out of the country, the Policy Planning Staff was just getting started, and Marshall's advisers could not have drafted a policy statement in time. ...read more.

The bill authorized an appropriation of $5.3 billion for the program's first twelve months. In his testimonies, Marshall had insisted that the program should be administered by an autonomous agency headed by a single person (i.e., something like Dwight Eisenhower's 1944-45 Supreme Headquarters Allied Forces Europe). Congress was determined to have an important businessman head the Economic Cooperation Administration that was to implement the Marshall Plan. Paul Hoffman, head of the Studebaker Corporation and a favorite of Vandenberg's, was chosen. Marshall never interfered with the ECA after Hoffman took command. Examples of the Uses of Marshall Plan Aid The first ship carrying Marshall Plan aid arrives in Bordeaux, France, May 1948. U.S. Ambassador to France Jefferson Caffery is on hand to welcome it. A shipment of U.S. wheat arrives in the Netherlands. The Marshall Plan was a complex undertaking that is not easily described. The following are a few examples of how the program worked: (1) Pays freight subsidies for 16.8 million private voluntary relief packages to Europe. (2) Funds building of a new wharf in North Borneo to help that British colony export vitally needed rubber. (3) Assists building railroads and water systems in French North Africa (4) $50 million for medicine to combat tuberculosis. (5) Technical assistance program: over 3,000 Europeans make six-month visits to various U.S. industries to learn new techniques; there was a similar program in agriculture. (6) The Ford Motor Co. in Britain receives funds to replace machine tools needed to produce cars, trucks, and tractors for export, thereby earning valuable foreign exchange credits. (7) The Otis Elevator Company (U.S.) helps to modernize British factories, and its investment is guaranteed by ECA insurance. (8) ECA money enables Portugal to purchase key equipment and materials to build a new hospital-tender ship for its cod-fishing fleet. (9) The French aircraft industry in able to purchase propellers for the aircraft it is producing. (10) An alcohol-producing plant in Scotland is granted $6.5 million, thereby reducing British imports and facilitating plastic, pharmaceutical, and rayon production. ...read more.