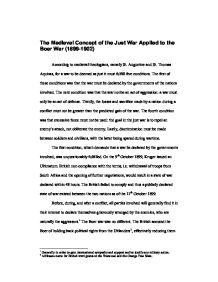 The Medieval Concept of the Just War Applied to the Boer War (1899-1902) According to medieval theologians, namely St. Augustine and St. Thomas Aquinas, for a war to be deemed as just it must fulfill five conditions. The first of these conditions was that the war must be declared by the governments of the nations involved. The next condition was that the war not be an act of aggression: a war must only be an act of defense. Thirdly, the losses and sacrifice made by a nation during a conflict must not be greater than the predicted gain of the war. The fourth condition was that excessive force must not be used: the goal in the just war is to repel an enemy's attack, not obliterate the enemy. Lastly, discrimination must be made between soldiers and civilians, with the latter being spared during wartime. The first condition, which demands that a war be declared by the governments involved, was unquestionably fulfilled. ...read more.

"The Tea- Time War", as it was commonly called, was to be a sweeping imperial victory that would boost Imperial morale as well as fill the coffers of the Empire with South African gold and diamonds. The earlier British disasters of Liang's Nek, Majuba, and the Jameson Raid seemed to have been overlooked and the British obviously thought that this would be a minimum expenditure, maximum return war. The Boers as well seemed reasonably confident about the war. Not having suffered a defeat from the British since 1884 at Boomplatz, and indeed having triumphed over them three times since, they were fairly certain their superior tactics would carry through a Boer victory. In terms of return for expenditure, remaining autonomous in the land that they felt was given to them by God was ample return for any expenditure. Barring the opening months of the war, in which British troops had not all arrived in South Africa, the British were always numerically superior to the Boers. ...read more.

The Boer War was, according to the medieval conception, a just war for the Boers, but not for the British. The Boers respected each condition as stipulated by St. Thomas Aquinas and St. Augustine. The same cannot be said of the British Empire. Allegations that their aggression was only to defend the rights of the Uitlanders were nothing more that a feeble attempt to disguise Imperialist greed. The force used towards the end of the war was disproportionate, and the neutrality of civilians was completely disregarded. Thus applied to the Boer War, the medieval concept of the just war tells us that according to its conditions, the Boers fought a just war, whereas the British did not. 1 Generally in order to gain international sympathy and support and/or justify any military action. 2 Afrikaans name for British immigrants to the Transvaal and the Orange Free State. 3 According to Milner in his jingoist "Helot Dispatch". 4 By attempting to force a 5-year residency for Uitlander citizenship on the Transvaal government instead of the 14-year residency it took for Transvaal citizenship. ...read more.