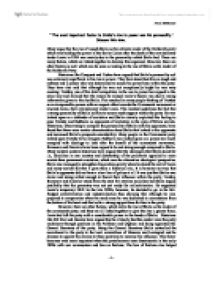 'The most important factor in Stalin's rise to power was his personality.' Discuss this view.

`'The most important factor in Stalin's rise to power was his personality.' Discuss this view. Many argue that the rise of Joseph Stalin as the ultimate leader of the Bolshevik party which was holding the power in the Soviet Union after the death of the revolutionary leader Lenin in 1924 was mainly due to the personality which Stalin had. There are many factors, which are linked together to develop this argument. However, there are other factors as well which can be seen as leading to the rise of Stalin as the leader of the Bolshevik Party. Historians like Conquest and Tucker have argued that Stalin's personality cult was extremely significant in his rise to power. They have described him as tough and ruthless and a person who was determined to secure his power base within the party. They have also said that although he was not exceptionally bright he was very cunning. Trotsky, one of his chief competitors in the run to power has argued in the same way and claimed that the reason he missed Lenin's funeral was due to wrong information given to him by Stalin. ...read more.

Many modern western historians have argued that the ideologies that Stalin stood for i.e., Socialism in one country and dictatorship of the proletariat appealed to more soviets than permanent revolution, which was the alternative ideological perspective. Stalin also managed to strengthen his position greatly when he stared the cult of Lenin and many soviets felt that it gave them a historical role. It is however not true that Stalin's opponents did not have a clear line of policy at all. It was just that Stalin was clever and strong witted enough to thwart their influence within the party. Trotsky, Kamenev and Zinoviev stood from the start for extreme socialism but Stalin argued justifiably that the peasantry was not yet ready for collectivisation. He supported Lenin's temporary NEP. In the late 1920s, however, he decided to go in for full-fledged collectivisation and industrialisation thus showing that although he was prepared to compromise when the need arose he was dedicated to communism from the bottom of his heart and this led to a strong support base for him in the party. ...read more.

Stalin's rise to power was also hastened by the fact that his most important rival Trotsky did make some fundamental mistakes to count himself out of contention and the other competitors never really posed a serious threat to Stalin. Trotsky missed the two golden opportunities he had to undermine Stalin. He refused Lenin's offer to become the deputy chairman of the Sovnarkom. He also did not speak in the place of Lenin at the XII Party Congress in 1923 where he could have humiliated Stalin. Stalin, as it has been argued, was also lucky to a certain extent for example, when illness prevented Trotsky from attending party meetings from 1923 to 1924. Thus we see that there were various factors linked together in the rise of Stalin as the leader of the Bolshevik party as a successor of Lenin. It cannot be said that it was only personality that led to the rise of Stalin. Indeed, his unique, strong and varied personality did help him in a number of ways, yet without the other factors in play it was hard to see him as the leader of the Bolsheviks. Aruni Mukherjee - 1 - ...read more.