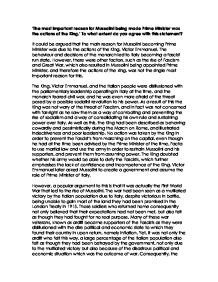 The most important reason for Mussolini being made Prime Minister was the actions of the King. To what extent do you agree with this statement?

'The most important reason for Mussolini being made Prime Minister was the actions of the King.' To what extent do you agree with this statement? It could be argued that the main reason for Mussolini becoming Prime Minister was due to the actions of the King, Victor Emmanuel. The behaviour and decisions of the monarch led to Italy becoming a fascist run state. However, there were other factors, such as the rise of Fascism and Great War, which also resulted in Mussolini being appointed Prime Minister, and therefore the actions of the king, was not the single most important reason for this. The King, Victor Emmanuel, and the Italian people were disillusioned with the parliamentary leadership operating in Italy at the time, and the monarch feared civil war, and he was even more afraid of the threat posed by a possible socialist revolution to his power. As a result of this the King was not wary of the threat of Fascism, and in fact was not concerned with far-right as he saw them as a way of combating and preventing the rise of socialism and a way of consolidating his own rule and sustaining power over Italy. ...read more.

Those soldiers who returned home consequently not only believed that their expectations had not been met, but also felt as though they had fought for no real purpose. Many of these war veterans, known as arditi became supporters of the Fascists as they were disillusioned with the dire political and economic state to which they found their country in upon return, namely inflation. Yet, it was not only the arditi who felt this way, a large percentage of the Italian population also felt as though they had been betrayed by the government, not only due to the mutilated victory but also because of the disastrous political and economic situation which was the outcome of war. Consequently, the Fascists, who opposed the present government and promised change to Italy politically, economically and socially, gained support from much of the Italian people. Therefore it could be argued that this was the main reason for Mussolini becoming Prime Minister in 1923, and not a result of the king. ...read more.

opposition as they were often afraid and were intimidated by the Fascist squads, squadristi, who would attack those associated with the socialists and anyone who opposed Fascists. The significance of Fascist violence is illustrated by the fact that between 1920 and 1922 the squadristi murdered over 2000 socialists and anti-fascists. However, it could be argued that when local authorities did actually resist and stand up to the fascist squads they were mostly effective in defeating them, and therefore fascist violence was not as significant as it may seem in the reason behind the rise of Mussolini to power in 1923. Additionally, the Fascist Party (he PNF), making themselves more legitimate as a politically party was also major reason behind Mussolini being appointed Prime Minister, as was the revision of Fascist policies that distanced themselves from the socialists as they were consequently able to attain greater popularity amongst the Italian people and widen their appeal. Although the fear of socialism and post war sentiment, as well as the action of the King all played a part in Mussolini's rise to power in 1923. ...read more.