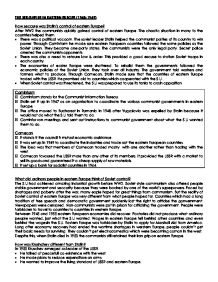 THE RED EMPIRE IN EASTERN EUROPE (1948-1949) How seccure was Stalin's control of eastern Europe? After WW2 the communists quickly gained control of eastern Europe. The chaotic situation in many fo the countries helped them. * There was a political vacoom. The soviet leader Stalin helped the communist parties of its country to win power. Through Cominform he made sure eastern European countries followed the same policies as the Soviet Union. They became one-party states. The communists were the only legal party. Secret police arrested the communists opponents. * There was also a need to retaure law & order. This provided a good excuse to station Soviet troops in each country. * The economies of easter Europe were shattered. To rebuild them the governments followed the economic policies of the Soviet Union. They took over all industry. The government told workers and farmers what to produce. Through Comecon, Stalin made sure that the countries of eastern Europe traded with the USSR. He promised aid to countries which cooperated with the S.U. * When Soviet control was threatened, the S.U was prepared to use its tanks to crash opposition Cominform ? ...read more.

Between 1945 and 1955 eastern European economies did recover. Factories did not produce what ordinary people wanted, just what the S.U wanted. Wages in eastern Europe fell behind other countries and even behind the wagesin the S.U. Eastern Europe was forbidden by Stalin to apply for Marshall Aid from America. Long after economy recovery had ended the wartime shortages in werstern Europe, people couldn't get their basic needs for surviving. They couldn't get electrodomestics which were becoming comon in the west. Despite this, when Stalin died in 1953 the communists still retained their iron grip on eastern Europe. How was Krushchev different from Stalin? In 1955 Kruschev emerged as leader of the USSR. * He talked of peacefull co-existence with the west. * He made plans to reduce expenditure on arms. * He wanted to improve the living standard of USSR and eastern Europe. * He relaxed the iron control of the S.U. * He closed down Cominform. * He signalled the countries of eastern Europe that they would be allowed much greater independence to control their own allies. ...read more.

The USSR allowed a new government to be formed under Imre Nagy. Nagy's government began to make plans: * They would hold free elections, create impartial courts, restore farmland to private ownership. * They wanted the total withdrawal of the Soviet army from Hungary. * They planned to leave the Warsaw pact and declare themselves neutral in the cold war struggle between east and west. * They thought that the new American president Eisenhower would support the new independent Hungary. Krushchev acceted some of the reforms, however, he could not accept the threat to leave the Warsaw pact. In October 1956 Soviet troops and tanks entered Budapest. Hungarians did not give in. They fought during two weeks and around 30.000 Hungarians were killed, another 2000.000 fled across the border int Austria to escape the communist forces. Imre Nagy and his leaders were imprisioned and then executed. The Hungarian resistance was crushed in two weeks, the western powers protested to the USSR but sent no help because they were too preocuppied with the Suez crisis in the middle east. Krushchev put J�nos K�d�r in place as leader. He introduced some of the reforms being demanded by the Hungarian people. But he didn't waver in the central issue, the membership of the Warsaw pact. ...read more.