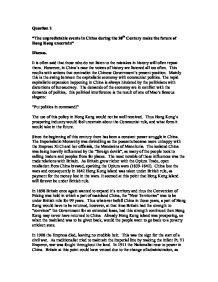 Question 2 "The unpredictable events in China during the 20th Century make the future of Hong Kong uncertain" Discuss. It is often said that those who do not listen to the mistakes in history will often repeat them. However, in China's case the voices of history are listened all too often. This results with actions that contradict the Chinese Government's present position. Mainly this is the swing between the capitalistic economy with communist politics. The rapid capitalistic expansion happening in China is always hindered by the politicians with distortions of bureaucracy. The demands of the economy are in conflict with the demands of politics, this political interference is the result of one of Mao's famous slogans: "Put politics in command!" The use of this policy in Hong Kong would not be well received. Thus Hong Kong's prospering industry would feel uncertain about the Communist rule, and what form it would take in the future. Since the beginning of this century there has been a constant power struggle in China. The Imperialistic Monarchy was dwindling as the peasants became more unhappy with the Empress Xi Ci and her officials, the Mandarins of Manchuria. The isolated China was being heavily influenced by the "foreign devils", as many of the people took to calling traders and peoples from far places. The most notable of these influences was the trade relations with Britain. As Britain grew richer with the Opium Trade, open retaliation from China brewed, sparking the Opium wars (1839-1842). China lost the wars and consequently in 1842 Hong Kong island was taken under British rule, as payment for the money lost in the wars. It seemed at this point that Hong Kong island will forever be under British rule. ...read more.

To ensure capitalist victory, USA spent a billion dollars in Vietnam's industry, however, the industry still collapsed. China sent in troops to ensure Communists take over, America also sent in the army. Even after spending $140 billion it was a failure for USA, in 1973 Vietnam was taken by the communist. Such failure could not be repeated, and so Hong Kong at this point would have been comfortable thinking it would never return back to China. At the death of Mao in 1976, Deng Xioping rose to power and ironically denounced Mao as a "capitalist roader". Deng realised that the economic policies of communism were failing, with the later fall of the USSR this idea was cemented. Deng saw that two things were necessary: 1) to ensure economic growth in the capitalistic way. 2) to keep an iron grip on the state, surpressing all forms of dissidence. Thus came the great phrase: "It doesn't matter if the cat is black or white, so long as it catches mice" (Times 6 January 1986) Thus in the late 1970s and 1980s begun a great period of mass capitalistic modernisation. The collective farms were broken up and given to individuals, independent businesses were encouraged, factory managers were given freedom to make their own decisions. The main way this worked was that if a certain quota was reached the profit after this was for the company. Trade relations were formed with the West, as foreign companies were encouraged to invest in factories in China. The "Open Door Policy" was established by Deng, as a means of improving scientifically and technologically. Trade also improved with the visits of President Bush and President Gorbachev. ...read more.

Hong Kong itself may be affected by this after 50 years, as the idea of communism is "workers of the world unite" (or in China's case peasants). Either the present Communist Government could be overthrown by another one to take its place. Or the next leader would realise that they had become "capitalist roaders" and may try to restore to what they thought was the "Golden Age". These groups may revert to the hard line communism in the 1960s, and Hong Kong may go through a "Cultural Revolution". This seems very unlikely as the PLA have already shown how efficiently they can deal with dissidents. Also another leader in the present administration would be foolish to do such a thing as trade agreements would be abolished and the West may decide to take military action. If the Financial Times (17/3/97) prediction is correct, China by the year 2005 would be the strongest nation economically and in military strength: "...China will have ten times more soldiers than Japan. In the recent period, China has launched an enormous programmes of weapons modernisation, which involved the purchase of $1.8 billion worth of Russian equipment. From 1993 China have increased its total military expenditure by 98%..." Thus it can be seen that China is growing to be a very powerful nation, and soon even more powerful as the latest technology is being developed by Hong Kong. Trade agreements (or the threat of the bullet) would ensure that this technology is shared. The future of Hong Kong seems very uncertain as they possibly could never match this military strength. As many times before the swing between communism and capitalism are seen, it may be that the swing next time could be disastrous for Hong Kong and the West. ...read more.