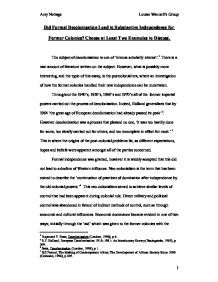 Did Formal Decolonisation Lead to Substantive Independence for Former Colonies? Choose at Least Two Examples to Discuss. The subject of decolonisation is one of 'intense scholarly interest'.1 There is a vast amount of literature written on the subject. However, what is possibly more interesting, and the topic of this essay, is the postcolonial era, where an investigation of how the former colonies handled their new independence can be undertaken. Throughout the 1940's, 1950's, 1960's and 1970's all of the former imperial powers carried out the process of decolonisation. Indeed, Holland generalises that by 1964 'the great age of European decolonisation had already passed its peak'2. However decolonisation was a process that pleased no one, 'it was too hastily done for some, too slowly carried out for others, and too incomplete in effect for most.'3 This is where the origins of the post-colonial problems lie, as different expectations, hopes and beliefs were apparent amongst all of the parties concerned. Formal independence was granted, however it is widely accepted that this did not lead to a decline of Western influence. Neo-colonialism is the term that has been coined to describe the 'continuation of practices of domination after independence by the old colonial powers.'4 This neo-colonialism aimed to achieve similar levels of control that had been apparent during colonial rule. ...read more.

After his assassination the first Prime Minister of India was Nehru, who paved the way forward for the new state, with his belief that 'authority rested not solely on domestic procedures of constitutional democracy but also on establishing its sovereignty in the international arena'.16 Furthermore Nehru experienced much success in bringing about a social and economic revolution that was not based on assistance from abroad.17 India's founding fathers were ' visionaries with a competitive streak'.18 Despite few incidences when there were disputes and interferences, largely 'India's foreign, security and economic policies followed a consistent pattern' throughout the twentieth century.19 The legacy left by Nehru and Gandhi ensured India was able to develop as an independent and successful economy free from the constraints of neo-colonialism. Hobsbawm even goes as far as to suggest the possibility that India may justify the label of 'the world's greatest democracy'.20 The other example I have chosen to discuss in detail is the decolonisation of Africa. This is a much more complex process with what are now fifty-six different countries to be considered, each having a different postcolonial experience.21 For example the Portuguese colonisers were forced out by armed force, in South Africa the culturally diverse population caused problems that are still evident today, and the strength of nationalism in other areas caused the decolonisation process to be speeded up. ...read more.