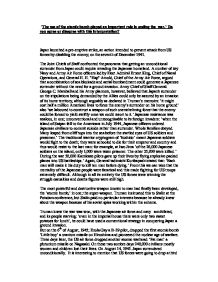 'The use of the atomic bomb played an important role in ending the war.' Do you agree or disagree with this interpretation?

'The use of the atomic bomb played an important role in ending the war.' Do you agree or disagree with this interpretation? Japan launched a pre-emptive strike, an action intended to prevent attack from US forces by disabling the enemy; on the seventh of December 1941. The Joint Chiefs of Staff confronted the panorama that getting an unconditional surrender from Japan could require invading the Japanese homeland. A number of key Navy and Army Air Force officers led by Fleet Admiral Ernest King, Chief of Naval Operations, and General H. H. "Hap" Arnold, Chief of the Army Air Force, argued that a combination of sea blockade and aerial bombardment could generate a Japanese surrender without the need for a ground invasion. Army Chief of Staff General. George C. Marshall and his Army planners, however, believed that Japan's surrender on the stipulations being demanded by the Allies could only be assured by an invasion of its home territory, although arguably as declared in Truman's memoirs: 'it might cost half a million American lives to force the enemy's surrender on his home ground' also 'we laboured to construct a weapon of such overwhelming force that the enemy could be forced to yield swiftly once we could resort to it.' ...read more.

Truman's' military advisers also discussed the high number of casualties and deaths that would be involved in bringing 'Japan to her knees'. We must also take into account that Truman, was up for re-election, he had to please the public. In this pretext, it does not appear warranted that the atomic bomb was at the US's best interest. Admiral William D. Leaky, chief of staff to Harry S .Truman proclaimed that: "It is my opinion that the use of this barbarous weapon at Hiroshima and Nagasaki was of no material assistance in our war against Japan." In this we must remember that it was a memoir published in 1950, although to some extent Admiral Leaky was right in mentioning that. There were several substitutes to considered, using the bomb in a non-combat demonstration that meant dropping the bomb in a deserted place where the Japanese could witness its power, change the U.S demand for unconditional surrender, allowing the entry of the soviets into the war, continuing conventional warfare and pursuing "Japanese peace feelers". Another idea was to give Japan an advance warning of where the bomb was going was to be dropped so that they could move the population out of the area. ...read more.

After analysing the evidence it is clear to me that, that America had numerous reasons not to use the a-bomb. Moreover, the evidence to arrive at this conclusion is bias but still offers reliable evidence. It is my belief that the use of the atomic bomb to bring about the end of World War II was not entirely justified With the many alternatives that were at the United State's disposal and all of the effects that the use of such weapons had on both environment and people for instance from a Japanese account vomiting, loss of appetite, diarrhoea with large amounts of blood, purple spots on the skin, bleeding romm the mouth, death', the U.S. motive for dropping the bomb on Hiroshima and Nagasaki was not justified, even though in all ,the atomic bomb did give the Japanese an excuse to surrender, and did ultimately play an important part in ending the war. . Dwight D. Eisenhower said in a meeting with Henry Stimson, Secretary of War during WW II, "... the Japanese were ready to surrender and it was not necessary to hit them with that awful thing. Furthermore the lack of Japanese supplies meant that surrender was inevitable. Here we can take that the United States only dropped the atomic bomb for their interests as a world power to demonstrate their supremacy. ...read more.