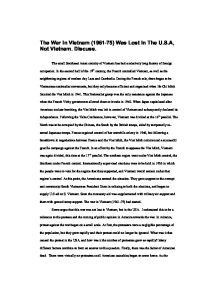 The War In Vietnam (1961-75) Was Lost In The U.S.A, Not Vietnam. Discuss. The small Southeast Asian country of Vietnam has had a relatively long history of foreign occupation. In the second half of the 19th century, the French controlled Vietnam, as well as the neighboring regions of modern day Laos and Cambodia. During the French rule, there began to be Vietnamese nationalist movements, but they only became efficient and organised when Ho Chi Minh founded the Viet Minh in 1941. This Nationalist group was the only resistance against the Japanese when the French Vichy government allowed them to invade in 1942. When Japan capitulated after American nuclear bombing, the Viet Minh was left in control of Vietnam and subsequently declared its independence. Following the Yalta Conference, however, Vietnam was divided at the 16th parallel. The North was to be occupied by the Chinese, the South by the British troops, aided by temporarily re-armed Japanese troops. France regained control of her erstwhile colony in 1946, but following a breakdown in negotiations between France and the Viet Minh, the Viet Minh commenced a successful guerilla campaign against the French. ...read more.

The drafting system meant that it was not just trained professional soldiers going to Vietnam. People were picked using a lottery with a questionable prize, and whether they wanted to or not, they were forced to go to Vietnam. This created great resentment among the population and those being chosen. They had not chosen to go. They did not want to, so why should they? After all, they thought, it's a free country. A typical protest response to being drafted was to either burn your draft card, or get a medical certificate exempting you from military duty. The drafting also seemed to be racially discriminate. In proportion to the black percentage of the population, the percentage of black soldiers in Vietnam was disproportionally high. This was caused by the fact that whites, with their more elevated social status, found it easier to get a medical certificate exempting them from military service. However, many blacks viewed this as a racist conspiracy, and also began to protest. The cost of war was another factor. The war cost a tremendous amount of money, which came of course, from taxes. ...read more.

North Vietnam and the V.C were fully committed to the war, the whole nation was in support of it, and it was actually being waged in Vietnam. The V.C troops knew what they were fighting for, and whom they were fighting against. The American troops mostly had no idea why they were fighting, or who they were fighting against, the peasants being so similar to the V.C. In conclusion, I believe that the Vietnam War was lost as a result of both. All the reasons and factors are linked together in a chain, each one causing or effecting the next. The Americans viewed the Vietnam War in the context of the Cold War. Therefore the Americans supported a series of unpopular anti communist governments, which lead to the increased efficiency of V.C guerilla warfare. The Americans did not adapt adequately, and this resulted in more American dead. This resulted in more protests, which results in etcetera, etc, etc. One may go down the line. The process leading to defeat was started in Vietnam, but ultimately it was the turning of public opinion against the war that lead to an American withdrawal. The fuse was touched off in Vietnam by a careless hand, and it burned back to touch off a powder keg of protest in the USA. ...read more.