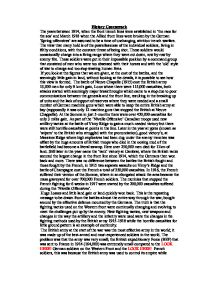 The years between 1914, when the front trench lines were established in 'the race for the sea' and March 1918 when the Allied front lines were broken by the German 'Spring offensives' are assumed to be a time of unchanging, attrition trench warfare.

History Coursework The years between 1914, when the front trench lines were established in 'the race for the sea' and March 1918 when the Allied front lines were broken by the German 'Spring offensives' are assumed to be a time of unchanging, attrition trench warfare. The view that many hold is of the powerlessness of the individual soldiers, living in filthy conditions, with the constant threat of being shot. These soldiers would occasionally charge into a firing range where they were cut down, row by row by enemy fire. These soldiers were put in their impossible position by a command group that consisted of men who were too obsessed with their horses and with the 'old' style of war to change and too stop wasting human lives. If you look at the figures that we are given, at the cost of the battles, and the seemingly little gain in land, without looking at the details, it is possible to see how this view is formed. The battle of Neuve Chapelle (1915) cost the British army 13,000 men for only 8 km's gain, Loos where there were 115,000 casualties, both attacks started with seemingly major breakthroughs which came to a stop due to poor communications between the generals and the front line, resulting in the breaking up of units and the lack of support of reserves where they were needed and a small number of German machine guns which were able to keep the entire British army at bay (supposedly it was only 12 machine guns that stopped the British at Neuve Chappelle). At the Somme in just 5-months there were over 420,000 casualties for only 3 miles gain. As part of the 'Nivelle Offensive' Canadian troops used new artillery tactics at the battle of Vimy Ridge to gain a much-needed victory but there were still horrific casualties at points in the line. Later in the year at ypres (known as 'wipers' to the British who struggled with the pronunciation), good victory's, at Messines ...read more.

The reason the British victories at Aubers Ridge and Neuve Chapelle weren't exploited was because of the breakdown of communications. Once the order to attack had been given there was no way of calling back the troops, the battlefields were too large for voice control as in the past and wireless messaging was 20 years away. The British commanders implemented a change to stop this; they ordered attacks to be in lines, trotting, almost shoulder-to-shoulder, with the equipment the troops needed to carry on the attack carried with them, this seemed like the solution. These new tactics, increased preliminary bombardments followed by 3-5 lines of soldiers were used for the first time at the battle of the Somme. The preliminary bombardment was intended to destroy German resistance before the lines swept into the trenches and killed the remaining Germans before pushing on, remaining in lines, staying organised while being able to push forward. Unfortunately this didn't work, 1 in 3 shells didn't explode and those that did had little effect on the Germans because of changes they had implemented (see below) and because of the affect explained above the wire was not cut and the men trotting forward were mowed down by the enemy machine guns and artillery, the attack was a disaster. Another factor in the defeat was that the Germans had changed their tactics, in direct response to the British heavy bombardment and linear tactics they had changed to a 'defence in depth' strategy which was a trench system which was maybe 4 or 5 trenches deep, with strong positions, usually pill box's and a front line of machine guns while the troops were not packed into the line any more. As a result it took longer for the British to breakthrough the defence and they got stuck in km of trenches and because the Germans were no longer packed shoulder-to-shoulder the artillery had very little effect. ...read more.

The first change was the introduction of the Mark II; these tanks were still used poorly in unfavourable conditions, especially in the swamp of 3rd Ypres where they sunk. However where the land was downhill and flat they could be used effectively such as at St. Julian away from Ypres where they headed a successful attack on a line of pillboxes. Despite their poor start the people in charge of the British army kept their confidence in their ability's and the next change occurred; the Mark IV was introduced, this was more bullet-proof, and by now the tactics had been changed to suit the tanks. They were used in large numbers on un-cratered land that was sloping towards the German trenches at the battle of Cambrai. The tanks quickly broke through the German lines and pushed out into open space Unfortunately the tanks could not carry enough fuel to go for more than 8 hours so these tanks could only go so far before they had to stop. The infantry reserves did not follow the tanks so they were left stranded deep in 'enemy' territory. The Germans quickly won the land back. This was a good demonstration of how tanks had their strong points and could be very effective if used correctly, but they also had their weaknesses that could be exploited. From this, the evidence leads me to believe that there was considerable change in the Fighting methods used by the British army on the Western front; there was also considerable continuity, especially in the end results of the battles. Both sides managed to change their industrial capabilities towards being a war of total war. Unfortunately the changes made by one side were quickly countered by a change made by the other side, this is what lead to the continuation (which was the continuity) of the war and it wasn't until their was no way for the Germans to change to counter the British and French tactics that the war was won. ...read more.