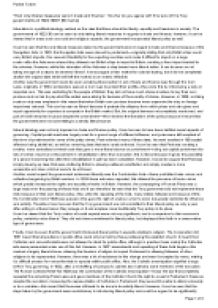 'Their only liberal measures were in trade and finance.' How far do you agree with this view of the Tory governments of 1822-1830?

﻿Patrick Tucker 'Their only liberal measures were in trade and finance.' How far do you agree with this view of the Tory governments of 1822-1830? [50 marks] Liberalism is a political ideology centred on the view that there should be liberty, equality and freedoms in society. The governments of 1822-30 can be seen as only taking liberal measures in regards to trade and finance; however, it can be viewed that in areas such as social and religious aspects, the government incorporated liberal policy as well. It can be seen that the only liberal measures taken by the government were in regard to trade and finance because of the Navigation Acts; in 1823, the Navigation Acts were relaxed by parliament?originally stating that only British ships could carry British imports, this caused inflexibility for the exporting countries and made it difficult to import on a large scale?after the Acts were relaxed they allowed non-British ships to import to Britain, creating a freer import market for the colonies. However, while this relaxation of the Acts was a step toward more liberal action, it can be seen as not taking enough of a step to be deemed ?liberal?. ...read more.

It can be seen that Peel was creating a smaller, more centralised criminal code that gave a more liberal stance on punishment?ruling out capital punishment for lots of crimes meant an embracement in rehabilitation rather than execution; this is liberal because it gives the possibility of a person becoming free after their rehabilitation in jail has been completed. However, it could be argued that Peel was simply clearing up laws that were cluttering Britain?s already scattered constitution and simply created a more accessible and clear criminal code to be enforced. Another social aspect the government addressed liberally was the Combination Acts?these prohibited trade unions and collective bargaining by British workers. In 1824 these acts were repealed, this allowed the presence of trade unions which greatly increased the rights and equality of works in Britain. However, the campaigning of Francis Place was a large reason for the passing of these Acts and it can therefore be seen that the Tory government did not implement these Acts because of their own liberal policy. ...read more.

However, despite this revolution, increasing the representation of Catholics in Parliament, they were still unable to attend university or be a minister?this meant that there was still work to be done to be wholly liberal. However, it can be seen that the steps taken by the government were revolutionary in introducing liberal policy and could be argued to be significantly more liberal in its practice than that of economic or social policy. Overall, therefore, it can be seen that view the only liberal measures the Tory government took was in trade and finance is wrong. Yes, they did take liberal action in their economic policy, but they also took liberal action in social policy?however this was not as effective as their economic policy. But, their religious policy marked an enormous shift in Tory governing?leaving the status quo and tradition of the House of Commons (as they would have using conservative policy) and allowed Catholics into Parliament. This was the largest and most significant step in establishing a liberal Tory government. Page of ...read more.