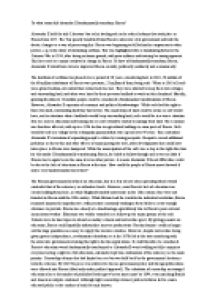 To What Extent Did Alexander II fundamentally transform Russia?

﻿To what extent did alexander II fundamentally transform Russia? Alexander II held the title 'Liberator' due to his leading role in the radical reforms that took place in Russia from 1855. The Tsar greatly benefited from Russia's autocratic style government and took the drastic changes as a way of preserving this. Russia was beginning to fall behind in comparison to other powers, e.g. in the delay of abolishing serfdom. This was highlighted after a humiliating defeat at the Crimean War in 1856, after losing on home ground, with poor military and training becoming apparent. This loss acted as a major catalyst for change in Russia. To have of fundamentally transform Russia, Alexander II would have to have improved Russia socially, politically, militarily and economically. The abolition of serfdom was phased over a period of 20 years, considering how in 1861, 50 million of the 60 million inhabitants of Russia were peasants, 23 million of them being serfs. When in 1861 all serfs were given freedom, all control their owner had was lost. They were allowed to keep their own cottages and surrounding land, and often were hired by their previous landlord to work on their farmland. ...read more.

Russia was already at a disadvantage agriculturaly due to Russia's poor soil and inconsistent weather. Education was widely extended as a follow up the emancipation of the serfs. Schools were declared open to all and secondary schools and universities grew. By giving peasants an education, Russia could hopefully industrialise increase productivity: Russian farmers could no longer sell the huge quantities necessary to supply the western countries. However, despite universities being given greater independence, revolutionary disturbances in the 1870s led to the state interfering with the autocratic government retaining the right to decline applications. It could therefore be considered Russia's education wasn't fundamentally transformed as AlexanderII wasn't willing to fully commit to everyone having a right to a full education, Alexander kept tim continuation of the autocracy as the main priority. Censorship reforms also had limited success but was held back by the government's hesitancy towards criticism. By 1865 the press was allowed to discuss government policy and foreign publications were allowed into Russia (albeit only under political approval). The relaxation of censorship encouraged education also as the number of published books grew by ten times more by 1894, even matching British and American outputs combined. ...read more.

Alexander II put Dmitri Milyutin in charge as he introduced a number of reforms over a 20 year period. The military was given far more advanced weapons, proper training and promotions became more open in an attempt to make leadership more effective . The biggest change, and most significant step towards a fundamentally reformed Russia, was in conscription. By ending the conscription of children and convicts and cutting conscription for men over 20 from twenty five years to six, Milyutin created a more motivated army. However, these reforms grew great criticism, notably from the merchants and nobility, where the idea of service was terrifying. This shows Alexander slowly attempting to close the social gap. In addition, the new army acted as a significant saving in government spending, lessening the strain on Russian economy. It also acted in restoring some of Russia's international reputation, lost after the Crimean War. In conclusion,Alexander II's effort cannot be denied as he implemented a wide range of reforms but could not maintain them to the full extent. When it comes to Russia's backwardness, Alexander II made little effect as other powers were so greatly advanced and his reforms were too little and too late. For example, despite exemplary efforts in the military, compared to Britain's renowned army, Russia couldn't compare. ...read more.