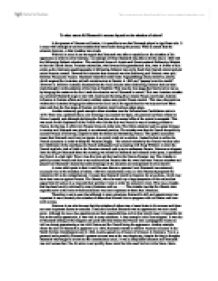 To what extent did Bismarck's success depend on the mistakes of others?

To what extent did Bismarck's success depend on the mistakes of others? In the process of German unification, it is possible to see that Bismarck played a significant role. It is easy with hindsight to see the mistakes that were made during the process. What is certain that the situation however, is that mistakes were made. With this in mind it can be argued that Bismarck was able to capitalise on the mistakes of his opponents in order to unify Germany. An example of when Bismarck was able to do this was in 1864 with the Schleswig-Holstein situation. The combined forces of Austria and Prussia entered Schleswig-Holstein to face the Danish forces. Prussian nationalists, who favoured the grossdeutsch idea, were in favour of this action as the Germany speaking people in Schleswig-Holstein were to be freed from Danish control and put under Prussian control. However the situation that occurred was that Schleswig and Holstein were split between Prussia and Austria. ...read more.

The mistake was that the French has publicly accused Prussia of allowing Leopold to take the throne and threatening France. This public accusation meant that Bismarck could not just ignore it or quietly work out a solution. Instead he had to refute the French accusation in order to keep the Prussians happy. The second mistake by the French was that after the withdrawal of the candidate, the French ambassador had a meeting with King Wilhelm; in short the French implied a lack of faith in the Prussian monarch and to try to embarrass Prussia. However a telegram from the king to Bismarck about the meeting was edited by Bismarck and released to the press, it portrayed the French in a bad light. Thus it was this final act that lead to the Franco-Prussian war. The mistake to publicly accuse Prussia and then to try and humiliate Prussia after the event had been Frances mistakes and played into Bismarck's hands that took advantage of the situation and manipulated it to his benefit. ...read more.

Another example where the skill of Bismarck is apparent is in 1864, Bismarck wanted to remove Austrian influence in the North German Confederation and in 1864 Austria agreed to a division of influence in Germany. Yet on a personal scale possibly Bismarck's greatest success was at the very beginning, despite the king's thoughts Bismarck was bought in to sort out the constitutional crisis. It was a complicated situation and Bismarck was well aware that if he did solve it and quickly there would be little need for him in the future. Some historians have said that Bismarck took his time in solving the problems and it could have been achieved earlier. If this is true then it shows his cleverness, not only did he manage to solve the constitutional crisis, get the backing of the liberals and nationalist, remove some Austrian influence and gain more power, he stayed in power and became important to King Wilhelm. ...read more.