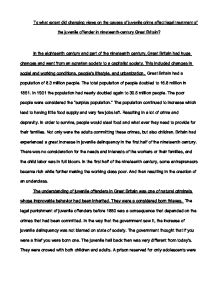 To what extent did changing views on the causes of juvenile crime affect legal treatment of the juvenile offender in nineteenth-century Great Britain?

To what extent did changing views on the causes of juvenile crime affect legal treatment of the juvenile offender in nineteenth-century Great Britain? In the eighteenth century and part of the nineteenth century, Great Britain had huge changes and went from an agrarian society to a capitalist society. This included changes in social and working conditions, people's lifestyle, and urbanization. Great Britain had a population of 8.3 million people. The total population of people doubled to 16.8 million in 1851. In 1901 the population had nearly doubled again to 30.5 million people. The poor people were considered the "surplus population." The population continued to increase which lead to having little food supply and very few jobs left. Resulting in a lot of crime and depravity. In order to survive, people would steal food and what ever they need to provide for their families. Not only were the adults committing these crimes, but also children. ...read more.

At that age, mostly delinquents were usually shipped to " The End of the World," which was Australia. The British were fighting crime, also including the crimes of a juvenile delinquent. The British decided to just ship them off to The End of the World. In the 1830's the perception of the criminal's rotten actions were inherited from previous generations of criminals. They were thought to be born with a crime in their blood. They had their own way of thinking and their own slang, they had developed habits to were it was natural for them to pickpocket. It became their lifestyle. The entire underclass consisted of pickpockets and harden criminals. The British citizens and officials were convinced that the criminals were just born with it. Their companions and girls would encourage them and teach them how to become a better criminal and become a more professional thief. In prison, it was not really a punishment for them. ...read more.

The Reformatory schools in Britain became a great success. There was one weakness in the Reformatory schools. Reformatory schools were only for young people who had been an inmate in prison first. Thus, creating Industrial schools. Where young people could just be seen to these schools without spending any time in jail first. Industrial schools provided education to neglected and delinquents. Industrial schools were more effective and successful. Since the establishment of Industrial schools, less children were sent to jail. And the sentences of the young criminals are much lighter than they were before. But, the practice of publicly whipping children was still being done. The legal treatment of the juvenile delinquents in Great Britain in the second half of the nineteenth century, became fairly modern in the twentieth century, not much has changed today in juvenile punishment. The juvenile offenders were called the "surplus population," they were the underclass in need of food and money and jobs. But the population growth was so rapid that there were no jobs left and the food was limited. Thus, the underclass had many pickpockets and criminal who needed to steal in order to survive. ...read more.