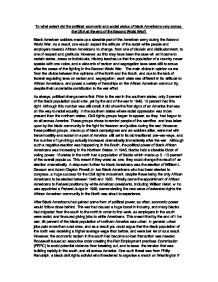 To what extent did the political, economic and social status of black Americans vary across the USA at the end of the Second World War?

To what extent did the political, economic and social status of black Americans vary across the USA at the end of the Second World War? Black American soldiers made up a sizeable part of the American army during the Second World War. As a result, one would expect the attitude of the racist white people and employers towards African Americans to change, from one of disdain and disillusionment, to one of respect and gratitude. However, as this may have been the case when it came to certain states, areas or individuals; History teaches us that the population of a country never speaks with one voice, and a wide mix of racism and segregation laws were still to ensue after the cease of the fighting in the Second World War. The main divide in opinion came from the divide between the opinions of the North and the South, and due to the lack of federal regulating laws on racism and segregation; each state was different in its attitude to African Americans, and posed a variety of hardships on the African American community, despite their undeniable contribution to the war effort. ...read more.

Dawson and Adam Clayton Powell Jr. two Black Americans who had been elected to congress, a huge success for the Civil rights movement, despite these being the only African Americans to be elected between 1943 and 1955. Finally came the appointment of African Americans to Federal positions by white American presidents, including William Haist, who was appointed a Federal Judge in 1949, demonstrating the new wave of extended rights the African American community in the North was about to experience. After Black Americans had gained some form of political power, as often, economic power would follow close behind. The war had caused a huge boost in industry, and many blacks had migrated from the south to the north in order to find work, as employers in the south were racist, and favoured giving jobs to white Americans. This meant that by the end of the war, 48 percent of the black population of northern America was urban. In general, urban jobs paid more than rural ones, and as a result you could argue that the black population of the north was receiving a higher average wage than before, and were better of as a result. ...read more.

Eating transport and educational facilities were not segregated, making it more likely for different races to socialise and mix, although the divide in economic stability between blacks and whites meant they often lived in different areas entirely, and so certain areas had much higher proportions of blacks than whites, meaning segregation existed in a way, only that it was by the economic injustice that forced blacks to less desirable areas and facilities, rather than segregation laws. Overall, the African American population were arguably better off after the war, although a large difference still remained between the north and the south, the north being much more desirable due to the treatment of blacks, causing many to relocate to northern states when possible. The American state system also allowed each state to have its own laws on racial segregation, and so one would notice many different attitudes towards African Americans if they were to analyse each state individually. Some legislation was passed in the Blacks favour, and an increase in civil rights groups, and black political influence showed blacks that there was hope for improvement, yet there was still a long way to go before they gained true equality. ...read more.