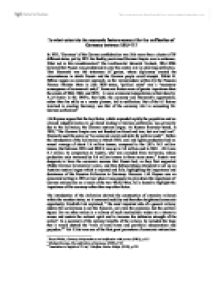 To what extent do the economic factors account for the unification of Germany between 1815-71?

To what extent do the economic factors account for the unification of Germany between 1815-71? In 1815, 'Germany' of the German confederation was little more than a cluster of 39 different states, yet by 1871 the freshly proclaimed German Empire was in existence. What led to this transformation? The traditionalist Heinrich Treitsch, 1834-1896 believed that Prussia was predestined to play the central role in achieving unification. That Bismarck was the statesman of genius, whose diplomacy created the circumstances in which Prussia and the German people could triumph. Whilst H. B�hme argues an economic approach, as the memorandum written by the Prussian Finance Minister Motz in June 1829 states, "political unity" was a "necessary consequence of commercial unity". Economic factors were of greater importance than the events of 1864, 1866, and 1870. A more revisionist interpretation is that taken by A.J.P.Taylor in the 1950's, that both, the economy and Bismarck's opportunism, rather than his skills as a master planner, led to unification. But of the all factors involved in creating Germany, was that of the economy vital in accounting for German unification? J.M.Keynes argues that the key factor, which expanded rapidly the population and so allowed industrialization to go ahead leading to German unification, was primarily due to the Zollverien, the German customs league. As Keynes famously stated, in 1919, "The German Empire was not founded on blood and iron, but coal and iron". Bismarck used the union as "an economic carrot and stick for political ends"1. ...read more.

As an American general put it, it was the knack of getting there "fustest with the mostest"11. Which in turn leads us directly back to the development of the railways and consequently founded on the foundation of the Zollverein, inherent to Germany's economic success. So the economic and financial strength of Prussia gave her the military resources she needed to challenge first Austria and then France. In 1893 Bismarck insinuates in his memoirs12 that from the start he had worked for the unification of Germany, which implies that the economic and military factors were of less importance. However Bismarck does have an ulterior motive when writing this. He will wish to heighten his responsibility for unification to emerge as the hero of Germany and the fatherlands most patriotic figure. Yet there is other evidence to reinforce this contention: for instance the remarks he is supposed to have made on a visit to London during the summer of 1862, when at a dinner party he spelled out to Disraeli more or less what subsequently happened. He said that when he was in charge he would initiate the reform of the army, find a pretext for war with Austria and destroy the Bund.13 Unfortunately, since the source of this is neither reliable, as it's authenticity can be questioned as it as anonymous eyewitness written a lot later than the event with the benefit of hindsight, it is open to question, quite apart from it's own inherent improbability. ...read more.