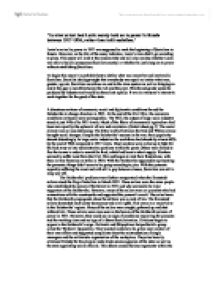 'To what extent had Lenin merely held on to power in Russia between 1917-1924, rather than built socialism.'

'To what extent had Lenin merely held on to power in Russia between 1917-1924, rather than built socialism.' Lenin's arrival to power in 1917 was supposed to mark the beginning of Socialism in Russia. However, as the title of the essay indicates, Lenin's aims didn't go according to plans. This essay will look at the reasons why and will also analyse whether Lenin was able to build a prosperous Socialist country, or whether he just clung on to power without establishing Socialism. To begin this essay it is probably best to define what was meant by and involved in Socialism. Socialist ideology taught that everybody was equal no matter what race, gender, age etc. Socialism would see an end to the class system as well as bringing an end to the gap in wealth between the rich and the poor. Wealth and goods would be produced by industry and would be shared out equally. It was in everyone's interest to work together for the good of the state. A disastrous mixture of economic, social and diplomatic conditions forced the Bolsheviks to change direction in 1921. At the end of the Civil War, the economic conditions in Russia were unimaginable. ...read more.

However, they could see no sign of conditions improving for peasants and the working class and no sign of a future Socialist nation. Divisions began to appear in the Bolshevik's reign. Kollantai and Shlyapkinov helped build a group called the Workers' Opposition. They wanted workers to be given more control of their own affairs and supported complaints about the reintroduction of single managers and the militaristic organisation of the workplace. They also heavily criticised Trotsky for his plans to make trade unions agencies of the state as well as the state appointing union officials. This debate caused furious arguments within the party by the end of 1920. The party's leadership position seemed very precarious at this point and it became obvious that not everyone shared the same view on Socialism within the party. In order to keep power Lenin realised that concessions to the peasants and some form of economic liberalisation had to be implemented. In order to regain lost support from the peasants and others such as the Kronstadt sailors, Lenin realised that War Communism had to be ended in order for this to happen, despite some stern opposition within the party. ...read more.

Lenin, however, did centralise the state between 1918 and 1924. This was an important aspect of Socialism and showed that the Bolsheviks were in a strong enough position to decide on how things should be run. It also showed that the Bolsheviks had a firm hold over Russia. Between 1918 and 1919, during the Civil War, Lenin was able to nationalise industries and brought them under the control of the Supreme Economic Council. Workers too were desperate for the nationalisation of industries so that factories were kept going and so therefore workers kept their jobs. The nationalisation of industries was a key feature in Socialist ideology. The Bolshevik party didn't want any private firms in Russia. Privatisation and profit making was seen as a Capitalist trademark, which the Bolsheviks detested. By the autumn of 1919, 80 per cent of all enterprises were part of a centrally directed economy. The rail system was another key aspect of Lenin's centralisation plans. Railways were vital for the war effort as it maintained food supplies to the major cities. However, the rail system was collapsing and Mensheviks who could not be trusted dominated the railway union. The Bolsheviks therefore decided that it needed to come under their control in order for the situation to improve. So, the railway system too become nationalised. ...read more.