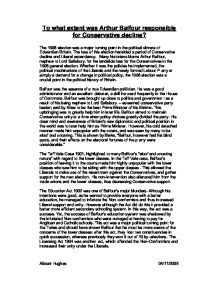 To what extent was Arthur Balfour responsible for Conservative decline? The 1906 election was a major turning point in the political climate of Edwardian Britain. The loss of this election heralded a period of Conservative decline and Liberal ascendancy. Many historians blame Arthur Balfour, nephew to Lord Salisbury, for the landslide loss for the Conservatives in the 1906 general election. Whether it was the policies he implemented, the political machinations of the Liberals and the newly formed Labour Party or simply a demand for a change in political policy, the 1906 election was a crucial point in the political history of Britain. Balfour was the essence of a true Edwardian politician. He was a good administrator and an excellent debater, a skill he used frequently in the House of Commons. Balfour was brought up close to politics and government as a result of his being nephew to Lord Salisbury - esteemed conservative party leader; said by Atlee to be the best Prime Minister of his lifetime. ...read more.

This act was a major political turning point for the Tories and should have shown Balfour that he must be more aware of the concerns of the lower classes: after this act, they lost two constituencies in quick succession, whereas previously they won 9 out of 10 by-elections. The Licensing Act 1904 was another act, which offended the Non-Conformists and increased their unity under the Liberals. The ending of the diplomatic isolation of Britain was to be one of Balfour's most important legacies, as it enabled Britain to begin to focus on Europe the new diplomatic theatre for power - the days of the colonies were over. The alliances with Japan (1902) and France (1904) helped Britain become more prepared for the ravages of World War 1. Balfour's reorganisation of both the army and navy also helped to prepare Britain for WWI. However, these achievements would only be fully appreciated after WWI, as the voters were not particularly bothered about military reforms whilst the empire was at peace. ...read more.

This was a grave mistake and increased Liberal support. The Lib-Lab Pact 1903 unified the anti-conservative vote and ensured that more constituencies voted into power either Liberal MPs or Labour MPs. This secret pact ensured that less Conservatives were voted into power thus reducing their chances of winning the election of 1906. To conclude, I believe that Arthur Balfour was one of the reasons for Conservative decline and the loss of the 1906 election. However, I do not believe that it was solely his fault, as rebellious members of his cabinet put forward reforms that he disapproved of and thus alienated their party from the mass voters. This will have increased the speed at which the conservatives were falling into decline. Although this is true, I think that the political machinations of the Liberals also played a hand in the downfall of the Conservatives. In addition, I believe that the tides of change were already acting upon the fortunes of the Conservative party, and that it was merely a question of when they would be voted out of power. ?? ?? ?? ?? Alistair Hughes 04/11/2008 ...read more.