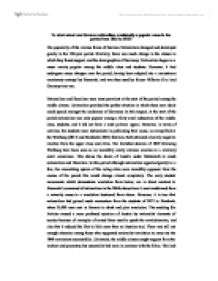 To what extent was German nationalism consistently a popular cause in the period from 1815 to 1919?

To what extent was German nationalism consistently a popular cause in the period from 1815 to 1919? The popularity of the various forms of German Nationalism changed and developed greatly in the 100-year period. Similarly, there was much change in the classes in which they found support, and the demographics of Germany. Nationalism began as a cause mainly popular among the middle class and students. However, it had undergone many changes over the period; having been adapted into a mainstream reactionary concept by Bismarck, and was thus used by Kaiser Wilhelm II to lead Germany into war. Nationalism and liberalism were most prevalent at the start of the period among the middle classes. Universities provided the perfect situation in which these new ideals could spread amongst the academics of Germany. In this respect, at the start of the period nationalism was only popular among a fairly small subsection of the middle class, students, and it did not have a wide political appeal. However, in terms of activism, the students were instrumental in publicising their cause, as exemplified at the Wartburg (1817) and Hambach (1832) festivals. Both attracted a heavily negative reaction from the upper class and elites. The Carlsbad decrees of 1819 following Wartburg have been seen as an incredibly overly extreme reaction to a relatively small occurrence. This shows the desire of Austria under Metternich to crush nationalism and liberalism. ...read more.

In the Vormarz period there was an intense need for the upper classes to suppress and quash nationalism, as seen in Metternich's reaction to the assassination of Kotzebue. Despite the fact that the 1848 revolutions failed, they did change the course of Germany towards a nationalist state. These ideals prevailed in the long term, however not in their original form. The elite, realising that this power could not be simply crushed, appropriated the cause to meet the elite's own objectives. In this respect, popularity of nationalism did improve among the upper classes after 1848, due greatly to the success of the industrialisation (helped by the Zollverein) but only because this political ideology had been tailored to their own desires. Prussian militarism determined the aggressive foreign policy in the events leading up to 1914, which further perpetuated the new patriotic slant of nationalism as promoted by the Kaiser as a result of Bismarck's realpolitik. The abandonment of Germany by individuals from the elite classes such as Ludendorff and Hindenburg after defeat left civilian socialists such as Ebert to pick up the pieces. In this respect it is no wonder that nationalism flourished under the weak provisional ruling of the Weimar republic, they had never been led to believe Germany's fallibility by the elites and the fact that they were not there to cede defeat left the German populace a feeling of injustice. ...read more.

The Union encouraged production. However, the Zollverein has been widely overestimated when described as one of the major causes of the popularity of nationalism. Railways were a very important part of German industrialisation. The first railway, the Prinz-Wilhelm-Eisenbahn, was opened on 20th September 1831. By 1871 much of the infrastructure was in place but it was in 1876 that the system reached its highest peak of investment. Although shipping remained very important, the railways took over as the leading form of industrial transportation; in 1903 4.1million tonnes were registered at German ports and they were important for importing and exporting goods. The railways helped to open up the coal industry in the Ruhr, and brought goods to the market place. The benefits of the railways transcended economics, and spread into social and political grounds. To conclude, nationalism was a cause that affected many different social groups and classes in different ways at different times. It was transformed throughout the period from a revolutionary ideology from below, to a policy that was appropriated by the mainstream political groups into conservatism. Thus it did enjoy more popularity around the end of the 19th century, but this is, debateably, as a result of the fact that it was forced onto the people by the ruling classes. Nationalism endured the defeat of WW1 due to the Stab in the Back Theory, and prevailed as a popular cause even in 1919, although not in its original form. ?? ?? ?? ?? ...read more.