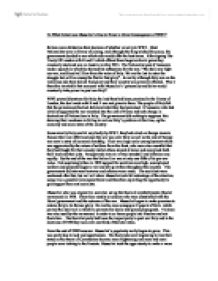 To What Extent was Mussolini's Rise to Power a Direct Consequence of WW1?

To What Extent was Mussolini's Rise to Power a Direct Consequence of WW1? Italians were divided on their decision of whether or not join WW1. Most Nationalists were in favour of joining, and although the King wished for peace, the government decided to see which side would offer the best terms. After signing The Treaty Of London with B and F which offered them huge territorial gains they eventually declared war on Austria in May 1915. The Nationalist poet d'Annunzio made a speech in which he showed his enthusiasm for the war, "We shall now fight our war, and blood will flow from the veins of Italy. We are the last to enter the struggle but will be among the first to find glory". In reality although Italy was on the victorious side they did not find glory and their country was severely affected. Was it therefore inevitable that someone with Mussolini's' personality and drive would eventually take power in post war Italy? ...read more.

Foreign trade was at a virtual standstill and inflation rose rapidly. By the end of the war the Italian Lira was at only one fifth of its pre war value. Not surprisingly then in 1919 support for socialism was high, unemployed workers and peasants began to riot and stir up strikes throughout the country. The government did intervene however and reforms were made. The socialists were weakened after that, but as I will show Mussolini took full advantage of the situation, using it as a possible Communist threat and therefore exploiting the opportunity to gain support from anti socialists. Mussolini who was originally a socialist, set up the fascio di combattimento (fascist movement) in 1919. They were mostly ex soldiers who were dissatisfied with the liberal government and the outcome of the war. Mussolini began to make promises to restore Italy to its former glory. He ran his own newspaper Il popolo d'Italia which proved the ideal tool in which to promote his ideals and spread propaganda. ...read more.

Now that the party had gained such huge popularity Mussolini knew they would be able to seize power. In 1922 they planned the take over of local governments and the eventual march on Rome. However the march was not necessary as the King invited Mussolini to form a government, partly to stop the threat of Civil war but also as he told a confident at the time, he wished 'To save a cabinet of poltroons and that in Mussolini he had a Prime Minister who was really a man of purpose who will last some time and has the will to act and act well'. In conclusion therefore WW1 had been a huge factor in determining the future of Italy and Fascism was able to grow out of peoples discontent with the outcome. However even before the outbreak of war people's faith in the government was already deteriorating. In addition the threat of Socialism in Italy was hugely exploited by Mussolini and had they or any other party had leadership qualities such as Mussolinis who knows what might have happened. ...read more.