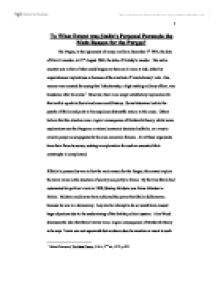 To What Extent was Stalin's Personal Paranoia the Main Reason for the Purges?

To What Extent was Stalin's Personal Paranoia the Main Reason for the Purges? The Purges, to the agreement of many, ran from December 1st 1934, the date of Kirov's murder, to 21st August 1940, the date of Trotsky's murder. The entire country was in fear of what could happen to them as all were at risk, either by acquaintances implications or because of the smallest of 'revolutionary' acts. One woman was arrested for saying that Tukachevsky, a high ranking military officer, was handsome after his arrest.1 However, there is no single satisfactory explanation for this terrible epoch in Soviet and even world history. Some historians look to the psyche of Stalin and point to his suspicious distrustful nature as the cause. Others believe that the situation was a logical consequence of Bolshevik theory, whilst some explanations see the Purges as a rational economic decision by Stalin, or a way to remove people as scapegoats for his own economic failures. All of these arguments have their flaws however; seeking an explanation for such an uncontrollable catastrophe is complicated. If Stalin's personality was in fact the main reason for the Purges, this cannot explain the terror alone as the structure of society was partly to blame. By the time Stalin had outsmarted his political rivals in 1928, Stanley Baldwin was Prime Minister in Britain. Baldwin could never have achieved the power that Stalin did however, because he was in a democracy. Any similar attempt to do so would have caused huge objections due to the undermining of the British political system. Alan Wood dismisses the idea that Stalin's terror was a logical consequence of Bolshevik theory as he says 'Lenin was not squeamish but nowhere does he mention or resort to such extreme methods' yet he does concede that Lenin's ...read more.

with anyone foreign, posing any possible threats to Stalin's power and to know too much about Lenin and his testament that denounced Stalin. Ilya Ehrenburg cannot find any logic linking the victims of the Purge as the strong-minded, independent Pasternak was spared, whilst the obedient Koltsov was liquidated.14 If Stalin did possess an economic motive in relation to who was killed in the Purges then it was not his main reason, he did not begin the Purges because of his economic failings, at least not directly. His initial reason was surely the threat he felt from possible alternatives to his leadership, as the assassination of Kirov shows. He may have felt this threat because of his economic failures however and this indirectly caused the Purges. It seems more likely that once the Purges began; controlling them was like directing a bull to the china shop's exit: it may get there in the end, but at its own pace and direction, wreaking havoc in the meantime. Stalin can be alleviated of the weight of some of his crimes to an extent, because he did not have absolute power over the entire Purges. Although Stalin had set the wheels in motion he would never have assumed that the country would be so thoroughly purged. Chris Ward sees this as predictable; he argues that if the purges grew out of the logic of Bolshevism then the Yezhovschina was bound to grow from the Purges.15 The Yezhovschina was the time in which Yezhov, known as the bloodthirsty dwarf was head of the secret police, the N.K.V.D. It was sometimes believed that Stalin knew nothing of what was going on at the time. It is certainly true that when Yezhov himself was purged and Beria took over his role, the terror eased somewhat. ...read more.

the Nazi-Soviet Pact of 1939'30 Rybakov too saw the Purges as a way for Stalin to avoid any condemnation about his foreign policy, as he says that 'the sole socialist country in the world could survive only if it were unshakably stable'.31 This controversial desire of Stalin's to form an alliance with Germany, does explain why the Army were purged, yet not the rest of the terror. Once again, although Stalin probably did not initiate the Purges for this reason it was a convenient end product. Although it is fairly unlikely that there would have been much disapproval of Stalin's decision, he was the sort of character, who would rather be rid of any chance of confrontation in the future, instead of waiting for it to arrive. The nature of Leninism, did not logically lead to the Purges, but to the situation in which the Purges could happen, if the wrong sort of person became dictator of the Party. Lenin's attitude to the Party, also led to the relative agreement with the Purges that most of the accused felt. The Purges then became almost inevitable as a man of Stalin's nature assumed power, as he distrusted almost everyone and genuinely feared a plot against him. However, once the Purges had begun, the effect was like a rolling snowball, as each person feared for their own lives, they tried to save themselves by denouncing others. Just as Stalin's nature led to the Purges, growing from Bolshevism, Yezhov's nature led to the Yezhovschina growing from the Purges. Stalin did not initiate the Purges because of a desire to make economic scapegoats or unify the country in foreign policy opinion, but whilst the Purge occurred he seized these opportunities. Had it not been for Stalin's paranoia the Purges would never have occurred. ...read more.