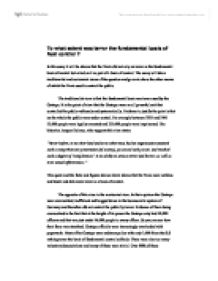 To what extent was terror the fundamental basis of Nazi control ?

To what extent was terror the fundamental basis of Nazi control ? In this essay it will be shown that the Nazis did not rely on terror as the fundamental basis of control but relied on it as part of a basis of control. The essay will show traditionalist and revisionist views of the question and go on to show the other means of which the Nazis used to control the public. The traditionalist view is that the fundamental basis was terror used by the Gestapo. It is the point of view that the Gestapo were an all powerful unit that controlled the public ruthlessly and systematically. Evidence to justify the point is that on the whole the public were under control. For example between 1933 and 1945 32,000 people were legally executed and 225,000 people were imprisoned. The historian Jacques Delarue, who supports this view states: "Never before, in no other land and at no other time, had an organisation attained such a comprehensive penetration (of society), possessed such power, and ...read more.

Over 80% of these denunciations were voluntary and often used as a way of getting rid of an unwanted husband or an unpleasant neighbour. This shows that the fundamental basis of control was not terror. The synthesis of these two arguments is that the Gestapo may be overstretched but the brutality and terror that they did use was sufficient to keep the public under control. However, despite the apparent weakness of the Gestapo, the image of power served to intimidate potential opposition and more importantly to gain co-operation from the public. There were other ways the Nazis controlled the public. One of these fundamental basis of control why bother with propaganda. The idea of propaganda was to indoctrinate the people without them knowing but to spell out the core ideas and beliefs. A quote from Goebbel's states: "The propaganda must always be in a position to speak to people in language that they understand. ...read more.