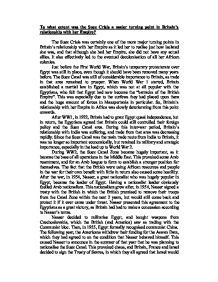 To what extent was the Suez Crisis a major turning point in Britain's relationship with her Empire?

To what extent was the Suez Crisis a major turning point in Britain's relationship with her Empire? The Suez Crisis was certainly one of the more major turning points in Britain's relationship with her Empire as it led her to realise just how isolated she was, and that although she had her Empire, she did not have any actual allies. It also effectively led to the eventual decolonisation of all her African colonies. Just before the First World War, Britain's temporary protectorate over Egypt was still in place, even though it should have been removed many years before. The Suez Canal was still of considerable importance to Britain, as trade in that area remained to prosper. When World War 1 started, Britain established a martial law in Egypt, which was not at all popular with the Egyptians, who felt that Egypt had now become the "barracks of the British Empire". ...read more.

The fact that the British were using African resources and people in the war for their own benefit with little in return also caused some hostility. After the war, in 1954, Nasser, a great nationalist who was hugely popular in Egypt, became the leader of Egypt. Having a nationalist leader obviously fuelled Arab nationalism. This nationalism grew after, in 1954, Nasser signed a treaty with the British in which the British promised to remove their troops from the Canal Zone within the next 2 years, but would still come back and protect it if it ever came under threat. Nasser presented this agreement to the Egyptians as a great victory, as Britain had had to make a concession according to Nasser's terms. Nasser decided to militarise Egypt, and bought weapons from Czechoslovakia, which the British (and America) ...read more.

The crisis left Britain feeling very isolated, and wanting to make more alliances in the world. The crisis also made Nasser out to be a 'king of Arab nationalism', but it also provoked more instability in the Middle East. The crisis didn't affect West Africa, but undoubtedly changed attitudes towards Empire within the Empire itself, and encouraged much nationalism in other African colonies. The British people now were no longer hugely interested in Empire after this, as they realised that they needed to concentrate more on their own country than other far off colonies. The crisis also contributed to the UN resolution of 1960 which stated that countries should give up their colonies sooner rather than later, which pushed the French and Belgians to withdraw from their colonies, and this too put pressure on the British to leave. ...read more.