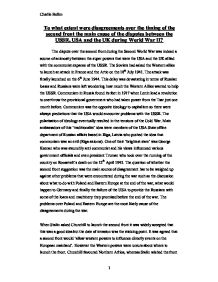 To what extent were disagreements over the timing of the second front the main cause of the disputes between the USSR, USA and the UK during World War II?

To what extent were disagreements over the timing of the second front the main cause of the disputes between the USSR, USA and the UK during World War II? The dispute over the second front during the Second World War was indeed a source of animosity between the super powers that were the USA and the UK allied with the communist expanse of the USSR. The Soviets had asked the Western allies to launch an attack in France and the Artic on the 18th July 1941. The attack was finally launched on the 6th June 1944. This delay was devastating in terms of Russian losses and Russians were left wondering how much the Western Allies wanted to help the USSR. Communism in Russia found its feet in 1917 when Lenin lead a revolution to overthrow the provisional government who had taken power from the Tsar just one month before. Communism was the opposite ideology to capitalism so there were always predictions that the USA would encounter problems with the USSR. The polarisation of ideology eventually resulted in the tensions of the Cold War. ...read more.

The wishes of the Russians were also very hard to accept in the American presidential camp as Roosevelt was a 'son of Wilsonianism' which meant he believed all people should have self determination and the right to democracy. The Atlantic Charter was the form of post war settlement the Western Allies wished but the Russians wanted the opposite for either protectionist motives of simply in order to spread Communism further and further away from the Kremlin. This attitude is a post- revisionist idea as it places both parties in the blame for the Cold War as they both wanted what would suit them and did not take into consideration the needs and wants of their allies, both sides may have been at fault because of their selfishness. The Western Allies wished Russia to have control of Poland as far as the Curzon line, which was established in 1919 by the British foreign minister, and in return Poland would be compensated with parts of Eastern Germany. This problem was discussed at all the war conferences and was a major or perhaps the major sticking point, which denied the allies post war harmony. ...read more.

The delay of the second front was a major blow for the Soviets because it meant many more lives were lost on the Eastern front, this revisionist view blames the Western Allies because they were not quick enough to react to Russia's plea. The delay did sour relations but was not the main cause of disputes during the war. The main reason for disputed was the countries different views on what should happen to Poland and Eastern Europe. Russia wanted it all under the influence of the Kremlin and the USA wanted it to be just as Woodrow Wilson would have wanted it in 1919. The topic was discussed at Tehran, Yalta and Potsdam and was a major cause of tension between the allies. The traditionalist view that Russia wanted to much and was trying to increase it sphere of influence just so Moscow had control over more people can be brought up but the revisionist view that Russia was still wary of a German backlash and wanted a buffer state in order to protect itself from further future invasion also holds up too. The disagreements were the main cause of disputes between the allies during the war although the timing of the second front was a sticking point in a very frictional alliance. Charlie Bellm 1 ...read more.