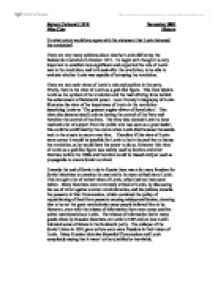 To what extent would you agree with the statement that Lenin betrayed the revolution?

To what extent would you agree with the statement that Lenin betrayed the revolution? There are very many opinions about whether Lenin did betray the Bolshevik revolution in October 1917. To begin with though it is very important to establish how significant and supported the role of Lenin was to the revolution, and to Russia after the revolution, to be able to evaluate whether Lenin was capable of betraying the revolution. There are two main views of Lenin's role and position in the party. Firstly, there is the view of Lenin as a god-like figure. This view depicts Lenin as the symbol of the revolution and the main driving force behind the achievement of Bolshevik power. Leon Trotsky's biography of Lenin illustrates his view of the importance of Lenin in the revolution describing Lenin as 'The greatest engine-driver of Revolution'. This view also demonstrated Lenin as having the control of the Party and therefore the control of the State. ...read more.

Many Russian historian discarded Communism and Lenin completely saying that it wasn't either justified or inevitable. Therefore in conclusion, I believe that Lenin must have had a significant role in the revolution and to Russia after the revolution. I believe this must have been the case because of the tremendous support from the public and key figures in the Bolshevik Party such as Trotsky. Also because even when there was freedom to be critical about Lenin there was no evidence to support that Lenin was the main person behind the revolution and the party in general. Therefore now we can confirm that Lenin did have a very significant role in the revolution and Bolshevik Russia, it is possible to evaluate if Lenin was a betrayer or a great revolutionist. There are very many views about whether Lenin did betray the revolution. The biggest factor for promoting Lenin not betraying the revolution is the factor that it would take time for the Bolsheviks to set up Russia to be ready to become Communist and to therefore hand over the country to the Proletariat. ...read more.

A big factor that made Lenin look like he betrayed the revolution is the New Economic Policy because it went against Marxists views by bringing in capitalist policies like small private industry and private trade. Therefore it can be seen that Lenin was not working in the interests of the proletariat and therefore betrayed them. However, some Bolsheviks would argue that it was brought in as a short-term policy to help the proletariat in the long run. A big factor that makes Lenin look like he betrayed the revolution is the fact that there was very little involvement from the industrial workforce. The majority of the party was run by the upper classes and not the industrial workforce, which Lenin and Marx believed the basis of the revolution should be around and therefore without them Lenin was betraying the revolution. However, Lenin believed that a group of intellectuals dedicated to furthering the interests of the workers could seize power in the interests of the proletariat, but there still should have been some involvement by proletariat. Robert Catherall 12PE November 2002 Miss Clay History ...read more.