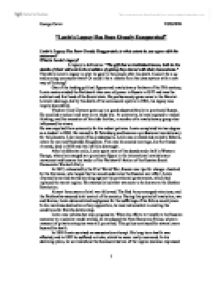 Lenin's Legacy Has Been Grossly Exaggerated; to what extent do you agree with the statement?

"Lenin's Legacy Has Been Grossly Exaggerated" Lenin's Legacy Has Been Grossly Exaggerated; to what extent do you agree with the statement? What is Lenin's legacy? A legacy is defined as: "The gift that an individual leaves, both in the details of their will and in the tradition of giving they shared with their descendents." Therefore Lenin's legacy is what he gave to the people after his death. Could it be a up and coming communist state? Or could it be a release from the class system with a new way of thinking? One of the leading political figures and revolutionary thinkers of the 20th century, Lenin masterminded the Bolshevik take-over of power in Russia in 1917 and was the architect and first head of the Soviet state. He posthumously gave name to the Marxist-Leninist ideology, but by the death of the communist system in 1991, his legacy was largely discredited. Vladimir Ilich Ulyanov grew up in a good educated family in provincial Russia. He excelled at school and went on to study law. At university, he was exposed to radical thinking, and the execution of his older brother, a member of a revolutionary group also influenced his views. ...read more.

In his declining years, he worried about the bureaucratisation of the regime and also expressed concern over the increasing role of Stalin. He eventually died a great leader who most followed in 1924. After Lenin's death Stalin as the chief leader of the Party and the state creatively applied and developed Marxism-Leninism. In the struggle to defend the legacy of Leninism against its enemies - the Trotskyites, Zinovievities and other bourgeois agents - Stalin expressed the will and wishes of the people and proved himself to be an outstanding Marxist-Leninist fighter. The reason Stalin won the support of the Soviet people and played an important role in history was primarily that he, together with the other leaders of the Communist Party of the Soviet Union, brought about the triumph of socialism in the Soviet Union and created the conditions for the victory of the Soviet Union in the war against Hitler; these victories of the Soviet people conformed to the interests of the working class of the world and all progressive mankind. It was therefore quite natural for the name of Stalin to be greatly honoured throughout the world. ...read more.

This is also a way in which Lenin's Legacy could be grossly exaggerated. Lenin's Legacy has not been grossly exaggerated; this is because people believed that Lenin had led them into a new way of thinking, through revolution. The argument is that Lenin's legacy is the start of communism and that is all he has had to give; Stalin is the one who took communism and changed it into something completely different. Lenin laid down the foundations of communism from 1917-1924 and so therefore has given something to the people after his death to build on. He devoted his efforts into insuring that Marxism could be maintained and to overall reach Utopia. I agree that in some ways Lenin's Legacy has been grossly exaggerated through manipulation of the communist manifesto and through false propaganda. But from a modern day point of view Lenin was an innovator who led the Russian population through revolution and set the standard in modern communism. Stalin used Lenin and a way to get people's attention and he created a soviet state whereas Lenin wanted a communist state and so there is no comparison to say weather his legacy is exaggerated. George Carter 22/09/2004 1 ...read more.

The author makes some very interesting analytical judgments but this answer could have been more convincing if reference was made to some of Stalin's key policies (collectivisation, the purging etc) to enable comparison to fully assess Lenin's legacy. 3 out of 5 stars.