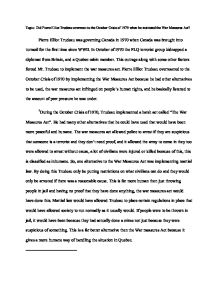 Topic: Did Pierre Elliot Trudeau overreact to the October Crisis of 1970 when he instituted the War Measures Act?

Topic: Did Pierre Elliot Trudeau overreact to the October Crisis of 1970 when he instituted the War Measures Act? Pierre Elliot Trudeau was governing Canada in 1970 when Canada was brought into turmoil for the first time since WWII. In October of 1970 the FLQ terrorist group kidnapped a diplomat from Britain, and a Quebec cabin member. This outrage along with some other factors forced Mr. Trudeau to implement the war measures act. Pierre Elliot Trudeau overreacted to the October Crisis of 1970 by implementing the War Measures Act because he had other alternatives to be used, the war measures act infringed on people's human rights, and he basically listened to the amount of peer pressure he was under. 1During the October Crisis of 1970, Trudeau implemented a harsh act called "The War Measures Act". He had many other alternatives that he could have used that would have been more peaceful and humane. The war measures act allowed police to arrest if they are suspicious that someone is a terrorist and they don't need proof, and it allowed the army to come in they too were allowed to arrest without cause, a lot of civilians were injured or killed because of this, this is classified as inhumane. ...read more.

[5]The next humane right that was violated during the October Crisis was "the right to know the reason of being detained". Once the War Measures Act was put into place, people were being arrested without probable reason, and when they asked, they were never given a reason. This is against the civil rights of Canadian civilians. People like Gerald Godin were jailed without cause and were never given a reason to why they were jailed, to this day people have never found out why they were thrown in prison, or what led for these people to be jailed. The governments' main reason to all that were arrested was that they have seemed suspicious of being with the FLQ, this is not a reason to be jailed because there were no stone-cold facts, so innocent people were jailed for no real reason. If Trudeau never overreacted these people would never have been arrested or if they were they would at least been able to give a reason to why they were jailed. [6]The last human right that was infringed on was "every individual is equal before and under the law and has the right to equal protection and equal benefit of the law without discrimination and, in particular, without discrimination based on race, national or ethnic origin, colour, religion, sex, age, or mental or physical disability." ...read more.

If Trudeau had kept his cool, and not listened to what other people were peer pressuring him to do, he could have implemented a more civil and less harsh act. So in 1970 when the October Crisis hit, there were a lot of mistakes made in the way that the situation was handled. Pierre Elliot Trudeau overreacted when he implemented the War measures Act, because he had other alternatives to use, he was infringing on peoples human rights and he listened to the peer pressure that he was under. Adam Kanji FOOTNOTES [1]- William Tetley. The October Crisis,1970 (Montreal : McGill-Queens university press) [2] Michel Vastel, Bourassa (Toronto: Macmillan Canada) [3] Peter Mansbridge, CBC TV The National, 4-23-2001 [4] Canada: A peoples history, The October Crisis, http://history.cbc.ca/history/?MIval=EpisContent&series_id=1&episode_id=16&chapter_id=1&page_id=4&lang=E [5] The law of the Charter : equality rights / Dale Gibson. * by Gibson, Dale.Toronto : Carswell, 1990. [6] Black October [videorecording] / Canadian boadcasting Corporation ; produced by Stephen Phizicky ; directed and written by Terence McKenna. & The law of the Charter : equality rights / Dale Gibson. * by Gibson, Dale.Toronto : Carswell, 1990. [7] Talking it out : the October crisis from inside / Francis Simard ; translated by David Homel. [8] Trappings of power, 1967-1977 [videorecording] / from the National Film Board of Canada. ?? ?? ?? ?? ...read more.