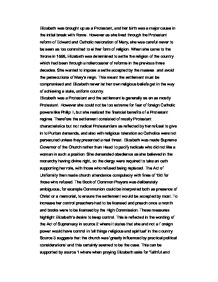 Using all the sources, and your own knowledge, assess to what extent the Church Settlement of 1559 was determined by Elizabeth Is own religious and political views.

Elizabeth was brought up as a Protestant, and her birth was a major cause in the initial break with Rome. However as she lived through the Protestant reform of Edward and Catholic restoration of Mary, she was careful never to be seen as too committed to either form of religion. When she came to the throne in 1558, Elizabeth was determined to settle the religion of the country which had been through a rollercoaster of reforms in the previous three decades. She wanted to impose a settle accepted by the masses and avoid the persecutions of Mary's reign. This meant the settlement must be compromised and Elizabeth never let her own religious beliefs get in the way of achieving a stale, uniform country. Elizabeth was a Protestant and the settlement is generally seen as mostly Protestant. However she could not be too extreme for fear of foreign Catholic powers like Philip II, but she realized the financial benefits of a Protestant regime. ...read more.

These can show that the main aim for her religious settlement was to achieve political stability and influenced by her belief in divine rights. Elizabeth's political views can also be seen in the structure of the church. She kept the Catholic hierarchy with the monarch on top, followed by Archbishops, bishops, lower clergy and then the people. This meant she could keep control from the top down and the fact that she opted for this rather than the Protestant structure with congregation and clergy being more equal suggest having control was more important than having a completely Protestant church. Elizabeth did show some of her personal beliefs in the church's presentation. She liked the look of the Catholic Church, and hence the candles, relics and altars were protected in the Royal Injunctions. The priests were required to wear vestments as Elizabeth wanted them to look different from the congregation. This upset Puritans and led to the Vestiarian Controversy of 1566, but Elizabeth did not back down over the matter. ...read more.

Overall the Church Settlement seemed more influenced by Elizabeth's political rather than religious views. Her determination to achieve uniformity was the main factor the creating the settlement which was mostly 'middle way'. She never let her personal convictions get fore her need to produce a settlement which will be accepted by the majority. Elizabeth was careful no to show too much preference for either religion for fear of alienating groups of people in her country, and so it's hard to decide what her true religious beliefs were. Therefore although certain aspects such as vestments were definitely influenced by her beliefs, it's difficult to decide just how much of the settlement were as a result of her own views. On the other hand her political views are clearly reflected in the settlement in aspects such as the church structure and the use of licensing to exert control. Hence it ca be said the settlement was influenced to some extent by her religious views but even more by her political views. ...read more.