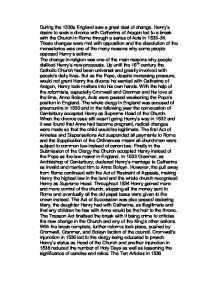 Using all the sources and your own knowledge, assess to what extent the dissolution of the monasteries contributed to opposition to Henry VIII?

During the 1530s England saw a great deal of change. Henry's desire to seek a divorce with Catherine of Aragon led to a break with the Church in Rome through a series of Acts in 1533-34. These changes were met with opposition and the dissolution of the monasteries was one of the many reasons why some people opposed Henry's actions. The change in religion was one of the main reasons why people disliked Henry's new proposals. Up until the 16th century the Catholic Church had been universal and greatly involved with people's daily lives. But as the Pope, despite increasing pressure, would not grant Henry the divorce he wanted with Catherine of Aragon, Henry took matters into his own hands. With the help of the reformists, especially Cromwell and Cranmer and his love at the time, Anne Boleyn, Acts were passed weakening the Pope's position in England. The whole clergy in England was accused of praemunire in 1530 and in the following year the convocation of Canterbury accepted Henry as Supreme Head of the Church. When the divorce case still wasn't going Henry's way in 1532 and it was found that Anne had become pregnant, radical changes were made so that the child would be legitimate. The first Act of Annates and Dispensations Act suspended all payments to Rome and the Supplication of the Ordinances meant all churchmen were subject to common law instead of canon law. ...read more.

Clerical abuses had been common knowledge for some time, with churchmen practicing things like pluralism, nepotism, simony, absenteeism, moral laxity and driven by greed. Many people were unhappy with the state of the church and Henry made sure that he used the discontentment to his advantage. Parliament passed the Act and small monasteries worth �200 or less plus any which voiced opposition it were dissolved first. The results were more positive for Henry and less so for the people. With huge amounts of land and possessions being put under Henry's control, the crown income doubled, giving the King vast quantities of wealth. He also achieved his aim in weakening the Catholic Church, which lost support after this persecution. For the common people however, the loss of monasteries meant a greater social change rather than religious. Monasteries had been what they relied on for anything resembling a welfare system. As the government did not take part in helping the poor, the monasteries were the only places providing health care, education and support for the disadvantaged. The dissolution of the monasteries thus led to increased vandalism and plight of the poor. These negative effects on society naturally led to opposition from the people who lost their only source of welfare with the dissolution. The divorce itself was also a cause of opposition. There was widespread sympathy for Catherine, who was determined to oppose the divorce and defend her position. ...read more.

Many also anticipated that the changes would not last and Henry would remain, since his stand in religion was never clear. Despite dissolving the monasteries, he was never committed to a full reform towards Protestantism which meant some people remained unaware of the changes which helped to lessen opposition. Henry executed both Catholic and Protestant extremists, hanging Catholics for treason and burning Protestants as heretics. These actions meant that radicals from both sides of religion were discontent with Henry's policies. His 'Middle Way' seeked to compromise the who population but in fact failed to full satisfy either faction. Overall, opposition to Henry had many causes and one major outcome was the Pilgrimage of Grace. As R. Rex states in source 3, the Articles had consisted of a 'list of social, economic, political and religious grievances'. He says that 'the Pilgrimage was more social than religious, but it could not have held together or spread so far without the ideology of religion'. This statements shows that social difficulties caused more opposition, but religion kept the rebels united. Since dissolving the monasteries had religious and social impacts, the dissolution was one of the major factors of opposition to Henry. However it was by no means the only or even most important cause, as other events such as the divorce triggered the whole change and to me seems the most important. The execution of martyrs and the changes in tradition also played major parts in putting people against Henry so the opposition was very much multicausal. ...read more.