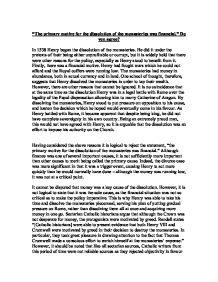 &quot;The primary motive for the dissolution of the monasteries was financial.&quot; Do you agree?

"The primary motive for the dissolution of the monasteries was financial." Do you agree? In 1538 Henry began the dissolution of the monasteries. He did it under the pretexts of their being either unprofitable or corrupt, but it is widely held that there were other reasons for the policy, especially as Henry stood to benefit from it. Firstly, there was a financial motive. Henry had fought wars which he could not afford and the Royal coffers were running low. The monasteries had money in abundance, both in actual currency and in land. One school of thought, therefore, suggests that Henry dissolved the monasteries in order to tap their wealth. However, there are other reasons that cannot be ignored. It is no coincidence that at the same time as the dissolution Henry was in a legal battle with Rome over the legality of the Papal dispensation allowing him to marry Catherine of Aragon. By dissolving the monasteries, Henry stood to put pressure on opposition to his cause, and hasten the decision which he hoped would eventually come in his favour. ...read more.

This is why Henry was able to take his time and dissolve the monasteries piecemeal, serving his plan of putting gradual pressure on Rome, rather than dissolving them all at once and acquiring more money in one go. Sectarian Catholic historians argue that although the Crown was not desperate for money, the protagonists were motivated by greed. Randell states "[Catholic historians] were able to present evidence that both Henry VIII and Cromwell were motivated by greed in their decision to destroy the monasteries. In particular, they took great pleasure in drawing attention to the fact that Thomas Cromwell made a conscious effort to enrich himself at the monasteries' expense." However, it should be noted that like all sectarian sources, Catholic writers from this period of time were not reliable sources as they rejected objectivity in favour of defending a position to which people of their faith would traditionally subscribe. Another cause was the corruption of the monasteries and their straying from Benedictine values. ...read more.

A key reason for the dissolution was the legal battle between the Crown and Rome. It is no coincidence that the dissolution of the monasteries took place at the same time, and as such it can be regarded as the trigger event. Despite this, it can still be argued that finance was the main reason to dissolve the monasteries, as it would have been necessary to sustain Henry's policies. Therefore, the legal battle can be regarded as the reason for the timing of the event, but as only a secondary cause for the policy itself. What can be concluded from this is somewhat ambiguous. It is impossible to tell Henry's exact motives for reformation, as his personality makes several ideas possible. Firstly, as a devout Christian he would have been angered by the decline of Benedictine values at the hands of many monasteries. However, he was also a shrewd man, and neither of the key advisors involved - Wolsey or Cromwell - were adverse to personal luxury. This makes financial motivation seem similarly likely. Because there is no conclusive evidence to suggest that the main motivation was financial, the statement has to be rejected. ...read more.