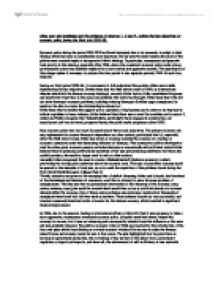 Using your own knowledge and the evidence of Sources 1, 3and 4, outline the key objectives of economic policy during the Nazirule 1933-39.

Using your own knowledge and the evidence of Sources 1, 3 and 4, outline the key objectives of economic policy during the Nazi rule 1933-39. Economic policy during the period 1933-1939 suffered immensely due to its necessity to adapt to Nazi ideology which was seen as considerably more important. Its low priority would explain why much of the policies were created simply to incorporate Hitler's ideology. In particular, rearmament and genocide took priority in this ideology especially after 1936, where the consistent economic policy under strong governmental control was suddenly replaced by a more radical and aggressive system. The significance of this change makes it necessary to analyse this time period in two separate periods, 1933- 36 and from 1936-39. During our first period 1933-36, it is necessary to full understand the position Hitler was in while implementing his key objectives. Firstly there was the Wall Street crash of 1929, an international disaster which left the German economy bankrupt, secondly Hitler had not fully consolidated his power and would find it hard due to the many new problems this crisis had brought. ...read more.

This community could be developed to rival the other great economic powers, and make Germany an economically self-sufficient nation! Hitler believed that by producing artificial raw materials of her own and producing substitutes for those she couldn't produce, she would no longer need to rely on other nations. Secondly Hitler recognised the need to create a Wehrwirtschaft (defence economy), in which prioritising his foreign policy ambitions above his economic ones. This type of peacetime economy would be geared to the demands of total war, so as to avoid the repetition of the problems faced during the First World War!! (Economic Collapse that is) Thirdly, attention was given to the emerging idea of deficit financing. Hitler and Schacht, the President of the Reichsbank and Minister of economics, used this to attempt to solve the mass problem of unemployment. The idea was that via government intervention in the financing of the economy, using various schemes, many jobs would be created which would then act as an artificial stimulus to increase demand within the economy. ...read more.

Nazi control over industry became much tighter. In source 4, Hitler predicted that the 4 year plan would effectively maximise Germany's efficiency, 'Just as we are now producing 700, 000 or 800,000 tons of petroleum, we could be producing 3 million tons'. It is fundamental to remember that whilst looking into the Nazi economic policies, that economics were not the priority of the Nazi leaders, particularly not for Hitler. Foreign policy and ideology took precedence over the workings of the economy, and this influenced many of the economic policies pursued by the regime, particularly after the introduction of the 4-year plan under Goring. It is this under lying factor which divides the time period into two, and when comparing the two periods there are many differences, in particular the emphasis on the drive for rearmaments in the 4year plan which was previously unseen during the recovery period. It is imperative to realise that during every objective Hitler pursued his over riding goal was rearmament and total domination of Europe. ...read more.