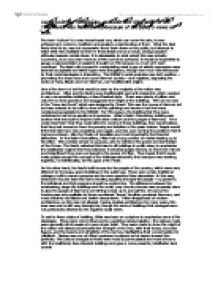 Using your own knowledge, consider how far culture in the Third Reich was transformed because of the party's views on race

Using your own knowledge, consider how far culture in the Third Reich was transformed because of the party's views on race. The term "culture" is a very broad based one, which can cover the arts, human achievement, customs, traditions and people's understanding of them. What the Nazi Party tried to do, was not necessarily 'force' their views on the public, but attempt to tailor what was available to them in these fields and as a result, change people's attitudes towards certain ideas. It is debateable to what extent this was actually successful, as an accurate measure of this cannot be achieved. It would be impossible to gauge a representation of people's thoughts on this because so much of it went unnoticed. The Nazi's did succeed in manipulating what types of artistic expression were deemed acceptable and which types were derogatory, though how much was influenced by their racial ideologies is interesting. The NSDAP's racial prejudice was both positive - promoting the Aryan race and a pure German society - and negative, degrading the works of Jews, Blacks and non-German, non-traditionalist origins. One of the forms of art that would be seen by the majority of the nation was architecture. Hitler and the Nazi's were traditionalist and anti-modernist, which resulted in very conservative buildings, a Neo-Classical style. There were plenty of pillars and columns to show grandeur and exaggerate the height of the buildings. This can be seen in the "Haus der Kunst" which was designed by Troost. ...read more.

Benno Elkan was a sculptor who suffered under the Nazi rule. He was Jewish and many of his works were of Jewish derivation, such as the "Hanukah Lamp" and later on the "Menorah" which currently stands in Jerusalem. Because his works were not accepted in the new German culture, he joined the exodus of Jewish artists in 1933 and was forced to move to England. Sculpture and Architecture were both very public forms of propaganda for the Nazi Party, a measure for the general public to see how well the party was doing and effectively a show to prove that they could restore Germany to its former glory. In 1937, the Exhibition of Great German Art was held to display some of these sculptures, as well as paintings, and was an opportunity for artists to show the nation "true" German Art. Obviously this Exhibition only contained works of art that were "pure". Well over 16,000 works were submitted and of these 6,000 chosen to display in the museum. Again, everything was of positive racial prejudice, with depictions of Aryan peasant families, peasants working on the land and attempts to reflect the Volksgemeinschaft. There is an ironic juxtaposition here, contrasting the Nazi's enormous, impressive buildings to show to the world how well Germany was recovering under fascist ruling, yet the paintings show a very different portrait of Germany - one where the majority of people are farming, and this is done with only very basic equipment. ...read more.

Films however, were provided more as an entertainment source, to keep people off the streets, making them forget their worries and feel that things were getting better under the Third Reich. On the whole the Nazi's guarded many aspects of the 'outlet' of culture, but this was done for a large number of reasons. It seems apparent that the positive racial prejudice had more to play in the change of culture, rather than the degrading racial views that the NSDAP held. Culture was not left to change by itself, but was more of a controlled modification by the party, so we cannot, therefore, say that culture changed naturally, it was more forced into what it became. What the Nazi's created however, was a world of culture where everything was politically linked. It is true that the 'outlets' to the public were definitely influenced by the party's views on race, but how successful this was to sway the people's thoughts on the issues simply cannot be represented. It is debated as to whether people's taste changed as a result, or whether it was again forced to change, because everything was so manipulated according to the Nazi thought, people had to live with what was on offer. Comparing this to other fascist regimes, this was expected, as the entire ideology of fascism depends on conforming and social engineering to gain the greatest possible prosperity, whilst keeping the nation happy, in the belief that the regime is for the best. Word Count: 2408 1 Art Critic Berthold Hinz, Art and Power. Europe under the Dictators 1930 - 34, ed. D. Ades, 1995, pg. 332 ...read more.