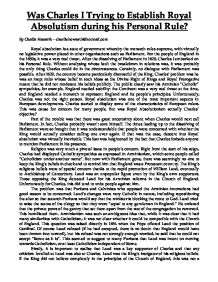 Was Charles I Trying to Establish Royal Absolutism during his Personal Rule?

Was Charles I Trying to Establish Royal Absolutism during his Personal Rule? By Charlie Howarth - charliehowarth@hotmail.com Royal absolutism is a state of government whereby the monarch rules supreme, with virtually no legislative power placed in other organisations such as Parliament. For the people of England in the 1630s, it was a very real threat. After the dissolving of Parliament in 1629, Charles I embarked on his Personal Rule. Without analysing whose fault the breakdown in relations was, it was probably the only thing Charles could do in the circumstances. Certainly, no dialogue with Parliament was possible. After 1629, the country became particularly distrustful of the King. Charles' problem was he was an inept ruler whose belief in such ideas as the Divine Right of Kings and Royal Prerogative meant that he did not moderate his beliefs publicly. The public clearly saw his Arminian "Catholic" sympathies, for example. England needed stability: the Continent was a very real threat at the time, and England needed a monarch to represent England and its people's principles. Unfortunately, Charles was not the right person. Royal absolutism was one of the most important aspects in European developments. Charles started to display some of the characteristics of European rulers. This was cause for concern for many people. But was Royal Absolutionism actually Charles' objective? Part of the trouble was that there was great uncertainty about when Charles would next call Parliament. In fact, Charles probably wasn't sure himself. The times leading up to the dissolving of Parliament were so fraught that it was understandable that people were concerned with whether the King would actually consider calling one ever again. If that was the case, descent into Royal absolutism was virtually inevitable. This fear was heightened by the fact that Charles forbade anyone to mention Parliament in his presence. Religion was very much a pivotal issue in people's concern. Right from the start of his reign, Charles had displayed Catholic sympathies as expressed in Arminianism, which some people called "Catholicism under another name". ...read more.

Firstly, he was insecure and his stammer made him reluctant to speak in public and communicate his ideas to Parliament (before it was dissolved in 1629). Throughout his reign, the King needed to be in the presence of a trusted adviser, otherwise he would appear ill at ease. Before his assassination, this was the Duke of Buckingham. After the dissolving of Parliament, this was the Queen, Henrietta Maria, who the King fell in love with during that time. The Queen's influence was considerable, although to what extent is unclear. There is evidence that Charles took a number of decisions against the Queen's wishes. What was dangerous was the fact that the Queen, having come to England from absolutist France, was exposing the King to some pro-Royal absolutism ideas. Apart from Catholicism, this included a willingness to remain very isolated from the country. This was one of the major reasons why the contemporaries thought that Charles was trying to establish Royal absolutism; all too often, Charles' policies got distorted and interpreted as another move along the way to absolutism. This was particularly the case as communication was so poor and the information so often got distorted. This was particularly a problem because of the fact that many of the counties that had very different political and religious views from the King were those furthest from London. So when information complete with anti-absolutist spin arrived, it simply reinforced those counties' anti-monarchy stance. Central to the King's isolationist style of rule and his complete inability to accept any difference of opinion on his decisions was his belief in his Divine Right of Kings. This was a very dangerous idea and this was realised by the contemporaries. In theory, it meant the King could do what he liked, even if it was a complete breach of a subject's liberties. The divinity of kingship would seem to suggest that parliament is not necessary, certainly a parliament that is anything more than a rubber stamp for the king's decisions. ...read more.

If the government looked into the actions of officials closely, it could ensure that these problems would disappear. This is a policy that served Wentworth well in Ireland. A part of this was the Book of Orders, which spelt out clearly how officials should behave, particularly concerning JPs. Another part of Thorough was a complete reform of the militia. Special commissioners appointed centrally would make sure that these reforms were being implemented. Fundamentally, Thorough was about centralising government using a variety of methods. Centralising government was seen as a move towards Royal absolutism and removing the freedom of the existing system (another feature of absolutism). This was particularly the case as it would give a lot more power to the King's Privy Council and not a more independent body such as Parliament. However, it was more a move to unite the country as Charles aimed to do, not an attempt to create absolutism. It was about making the country run more effectively but within the existing structure. Despite some absolutist traits, the King cannot be blamed for responding to the problems he had governing the country at the time. In conclusion, it is easy to take the evidence at face value as contemporaries did and accuse Charles of trying to create Royal absolutism. However, this was probably not the case as Charles' aims were more about turning England into a powerful country by creating uniformity than creating absolutism. This is not to say that the Personal Rule would have not resulted in absolutism, but it was not Charles' original intention. His new initiatives were undermined by deep suspicion of him working without Parliament and also poor communication, particularly to rural areas. He may have been trying to change the Church of England into an Arminian High church but this was probably not directly linked to the creation of Royal absolutism. In a time when England was threatened by superior overseas powers, Charles needed to make England more stable and powerful, and this is the reason for many of his schemes, particularly financially. ...read more.