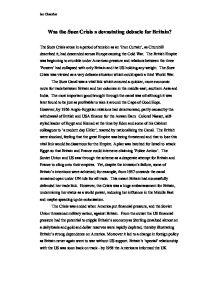 Was the Suez Crisis a devastating debacle for Britain?

Was the Suez Crisis a devastating debacle for Britain? The Suez Crisis arose in a period of tension as an 'Iron Curtain', as Churchill described it, had descended across Europe causing the Cold War. The British Empire was beginning to crumble under American pressure and relations between the three 'Powers' had collapsed with only Britain and the US holding any weight. The Suez Crisis was viewed as a very delicate situation which could spark a third World War. The Suez Canal was a vital link which ensured a quicker, more economic route for trade between Britain and her colonies in the middle-east, southern Asia and India. The most important good brought through the canal was oil although it was later found to be just as profitable to take it around the Cape of Good Hope. However, by 1956 Anglo-Eqyptian relations had deterriorated, partly caused by the withdrawal of British and USA finance for the Aswan Dam. ...read more.

The Crisis was ended when America put financial pressure, and the Soviet Union threatened military action, against Britain. From the outset the US financial pressure had the potential to cripple Britain's economy as Sterling devalued almost on a daily basis and gold and dollar reserves were rapidly depleted, thereby illustrating Britain's strong dependence on America. Moreover it led to a change in foreign policy as Britain never again went to war without US support. Britain's 'special' relationship with the US was soon back on track - by 1958 the Americans informed the UK government that they were in 'general agreement' with her position on Egypt and during the Cuban Missile Crisis Kennedy consulted with MacMillan. To understand if the crisis was 'devastating' it must be looked at in perspective. The death toll for British troops was merely 29. The economy suffered a short-term crisis but was soon back on track. ...read more.

Again, this should not be exaggerated as many historians argue that the Crisis had almost no detrimental effect to the Empire at all as Independence movements were already in full swing and the British Imperialistic views already in a minority. As Macmillan would comment only a few years later: "The wind of change is blowing through this continent [Africa], and whether we like it or not, this growth of national consciousness is a political fact". In conclusion the crisis did have many negative effects for Britain but most of these were short-term (economic downturn, collapse of international relations, humiliation and the short blockage of the Canal). Long-term effects were few - dependence on America was recognised, whilst there was a possible speeding up of de-colonisation and the loss of diplomatic power. The mistake was costly for Britain but can not be called devastating because there were few long term effects, the British public was unaffected and the important trade link was not lost. Ian Chandler ...read more.