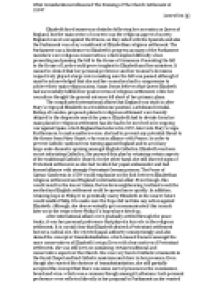 What considerations influenced the framing of the church settlement of 1559?

﻿What Considerations Influenced The Framing of The Church Settlement of 1559? James Kim (g) Elizabeth faced numerous obstacles following her accession as Queen of England, but the main sector of concern was the religious aspect of society. England was at war against the France, as they sided with the Spanish, and also the Parliament was a key constituent of Elizabethan religious settlement. The Parliament was a hindrance to Elizabeth?s progress as many of the Parliament members were religious conservatives, which implied difficulty when presenting and passing the bill to the House of Commons. Presenting the bill to the House of Lords would prove toughest to Elizabeth and her ministers. It cannot be denied that her personal preference and her Counsel?s decisions respectively played a large role in making sure the bill was passed, although it must be acknowledged that she and her councilors had to compromise to achieve their main religious aims. ...read more.

Although, she does eventually get excommunicated, this is much later on in the reign where Philip II?s hopes have dried up. After international affairs were gradually settled through the peace treaty, it was her personal preference that played a key role in the religious settlement. It is crystal clear that Elizabeth desired a Protestant settlement but not a radical one. She rejected papal authority unsurprisingly and also denied the concept of transubstantiation, which caused tremors amongst the more conservatives of Elizabeth?s reign. Even with clear motives of Protestant settlement, she was still keen on sustaining certain traditional and conservative aspects of the Church. She was very fond of Catholic ornaments in the Royal Chapel and had Catholic musicians and choir in her presence. Even though she rejected the doctrine of transubstantiation, she still partially accepted the concept that there was some sort of presence in the communion bread and wine, which was a common though amongst Lutherans. ...read more.

For instance, Elizabeth was given the title ?Supreme Governor? not ?Supreme Head?. It is unclear whether or not this change in title name was for conservative reasons or to calm political stirs of a woman naming herself superior to laymen. However, it still ensured her to have as much authority as Henry VIII or her brother. Amendements in the Uniformity Bill targeted the concept of transubstantiation as people were not in favour of the complete denial and rejection of this doctrine. Therefore, priests modified the words used in the Uniformity Bill to create deliberate ambiguity. This would allow diverse interpretations to be made by peers allowing less opposition. Last, the ?Ornaments Rubric? allowed traditional vestments and ornaments to be sustained in Church. It can be argued that the Catholics Bishops in the House of Lords had finally been given the upper hand; however, it must also be taken into consideration that this could simply have been part of Elizabeth?s personal preference as she was keen on keeping traditional ornaments in her Royal Chapel. In conclusion, the framing of the religious settlement of 1559 was based on numerous factors. ...read more.