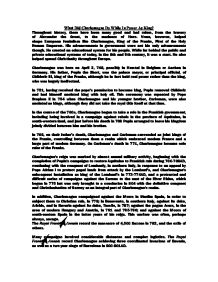 What Did Charlemagne Do While In Power As King?

What Did Charlemagne Do While In Power As King? Throughout history, there have been many good and bad rulers, from the bravery of Alexander the Great, to the madness of Nero. None, however, helped shape European feudalism like Charlemagne, King of the Franks, First of the Holy Roman Emperors. His advancements in government were not his only advancements though. He created an educational system for his people. While far behind the public and private educational systems of today, in the 8th and 9th century, it was a start. He also helped spread Christianity throughout Europe. Charlemagne was born on April 2, 748, possibly in Herstal in Belgium or Aachen in Germany. His father, Pepin the Short, was the palace mayor, or principal official, of Childeric III, king of the Franks, although he in fact held real power rather than the king, who was largely ineffectual. In 751, having received the pope's permission to become king, Pepin removed Childeric and had himself anointed king with holy oil. This ceremony was repeated by Pope Stephen II in 754 when Charlemagne and his younger brother, Carloman, were also anointed as kings, although they did not take the royal title itself at that time. In the course of the 760s, Charlemagne began to take a role in the Frankish government, including being involved in a campaign against rebels in the province of ...read more.

These later threats may have been overcome with relatively small armies of mounted vassals, driven as much as anything by the quest for booty, such as the vast amounts of treasure that were brought back from the sacking of the great fortress known as the Ring of the Avars. It is clear that Charlemagne was active in diplomatic relations. He himself may have married a Lombard princess in 770; and further marriage alliances were negotiated, although not implemented, with the Byzantine Empire and with Offa, king of the Mercians. With the former, his diplomacy merged with religious policy, when the council he convened at Frankfurt am Main in 794 opposed the Byzantine Church's recent decision on the worship of icons, and with the latter, Charlemagne also concluded a remarkable trade agreement. Perhaps the most significant diplomatic relations were with the popes, who had been responsible for authorizing the installation of Charlemagne's father, Pepin, and his successors as kings of the Franks in 751, anointing Pepin and his sons as kings in 754, and encouraging both Pepin and Charlemagne to intervene militarily in northern Italy. In 799, Pope Leo III was removed by factions in Rome and went to Charlemagne's palace at Paderborn, in Germany, where the ruler received him honourably and sent him back to Rome under escort. ...read more.

He often pointed out that the poorer students did better than the students who were better off. The reputation of the Palace School spread throughout Europe. Students from all across Europe came to the school. Charlemagne died on January 28, 814, at his palace in Aachen. Thereafter, in later periods, his image as a saint and hero loomed over the history of Europe. In the Gothic choir annexed to the surviving church of his principal palace at Aachen, his remains now lie in the golden shrine made for them by the German king and Holy Roman emperor, Frederick II, in the early 13th century. Charlemagne is important not only for the number of his victories and the size of his empire, but for the special blend of tradition and innovation that he represented. On the one hand, he was a traditional Germanic warrior, who spent most of his life fighting. In the Saxon campaigns he imposed baptism by the sword, and retaliated against rebels with merciless slaughter. On the other hand, he placed his immense power and prestige at the service of Christian policy, the simple life, the teaching of Latin, the copying of books, and the rule of law. His life, held up as a model to most later kings, hence come to life the fusion of Germanic, Roman, and Christian cultures that became the basis of European civilization. ...read more.