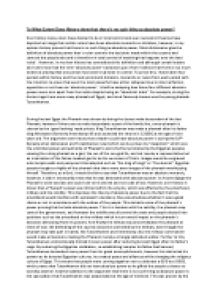 To What Extent Does History show that there is no such thing as absolute power?

﻿To What Extent Does History show that there is no such thing as absolute power? Over history many rulers have claimed to be in total control and even revisionist theories have depicted an image that certain rulers have been absolute monarchs or dictators, however, in my opinion history proves that there is no such thing as absolute power. Most dictionaries give the definition of absolute power that ?a ruler controls the decisions made within the country and controls the people also and is therefore in total control of anything that happens over the land ruled?. However, in my view history has contradicted this definition and although certain leaders and rulers have had the term ?absolute power? bestowed upon them I believe that there is too much evidence proving that one person has never truly been in control. To prove this, I have taken four periods within history and the most prominent dictators, monarchs or rulers from each period with the intention to prove that even the most powerful have either collapsed due to internal factors, opposition or not been an ?absolute power?. I shall be analysing how these four different absolute powers were torn apart from the inside despite being an ?absolutist state?. For example, during the Ancient age there were many pharaohs of Egypt, and most famously known was the young pharaoh Tutankhamen. During Ancient Egypt the Pharaoh was chosen by being the closest male descendant of the last Pharaoh, however if there are no male descendants a part of the family line, a new pharaoh is chosen by the ?good looking? royal priests. ...read more.

A further disproof of absolute power is the 1075 ?revolt of the earls? which was during William?s absence that two earls (Ralph de Gael the earl of Norfolk and Roger de Breteuil, the earl of Hereford) conspired to overthrow William. The reason for the revolt is unknown; however it does strongly argue that William did not have absolute power as even his most trusted people conspired to overthrow him. Parallels can be drawn between the revolt and the death of Tutankhamen, as both could have been over-thrown by their closest servants. Tutankhamen could have been assassinated by his servants for greed as a main reason which was the same reason for the provoked revolt by the Earls ? greed for wanting to rule England. Finally the most underlying factor that he did not have absolute power was that all non-Normans described him as ?William the bastard? proving that all non-Normans disproved of him. During the 1500s to the 1700s the most prominent absolute monarch was Louis XIV of France, he believed in the idea of Divine Right that God put him on the earth to rule. This meant that Louis ruled strictly and treated the people poorly and in turn many people had the idea of revolution developing inside their heads. Louis XIV or the sun king holds the distinction for being the longest ruling king in Europe after ruling for 72 years and 110 days. He began his ruling in 1661 after the death of his chief minister, the Italian Cardinal Mazarin. By the early 1680s Louis had greatly augmented the French influence around the world. ...read more.

This took the power out of Stalin?s control and soon the NKVD were controlling the people through fear and so power had shifted from Stalin to the NKVD which can be compared to William the Conqueror when he shifted power to the rich barons and the earls to keep the people in control so they cannot group and rise up. Finally, it can be argued that the distinct lack of power for Stalin was due to communism and having the people equal so that they were all similar. This proves that communism is the worst socioeconomic system devised as it allows the people to group en masse and detract from Stalin?s power. In conclusion, it is true to say that over the years there have been many powerful dictators, absolute monarchs, kings and leaders however, over history there hasn?t been one empire or regime that hasn?t eventually crumbled and collapsed due to the loss or shift in power. I would be fair to say that absolute power is non ? existent due to the different cultures and opinions that people carry through out the world and that the only absolute power is death. Furthermore, some could argue that absolute power has been obtained by leaders even if it was only for a minimal amount of time, however, it would be correct to say that absolute power has never existed as people will always conflict with opinions. In my view, there has never been a leader that has ruled with absolute power, I believe that inone way or another a person or organisation has detracted from the power or has worked against the will of the person who believes they are in control, in general the only absolute power is chaos. ...read more.