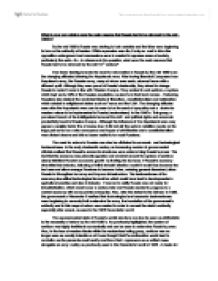 What in your own opinion were the main reasons that Russia had to be reformed by the mid 1850s?

limit undermine the army, the foundation of the government's authority and in this respect reform was needed in order to cement the state's authority especially after unrest, as seen in the 1825 Decembrist revolt. The superannuated state of Russia's social structure can also be seen as attributable to the necessity of reform by the mid 1850's. As previously highlighted, the system of serfdom was highly inefficient economically and can be seen to undermine Russia's power. Also, in the face of western ideals within the westernised ruling group, serfdom was no longer seen as morally tolerable and it was thought that it's continuation would lead to revolution as the peasants could easily overthrow their oppressors as a unified mass alongside an army mutiny as previously seen in the Decembrist revolt of 1825. A desire for reform, perhaps the enlightening the "dark masses", can be attributed to the Napoleonic wars where Europe represented a new world of industry, urbanisation and science against the traditional superannuated world of peasants, religion and autocracy. Other than being fundamentally unfair, it is also worth mentioning that the emancipation of the serfs as a class would be ...read more.

This brief flirtation with Western values may have aroused some of the people's hopes and could have added to anti abolitionist's sentiment perhaps supporting the need for concessions by the mid 1850's. oweHHsdfsddsdsdsd However the era enlightenment can be less cynically viewed as a genuine humanitarian help opposed to what it can be regarded a hot bed of anti tsarist sentiment. In reference to the question, I believe that the most important reason to why reforms were needed by the mid 1850's was the fact that the Russian social and economic structures were both superannuated and were not suited to a nation set to be great European factor. I believe this because Russia was a comparatively a medieval state in a new world of firearms, industrialistation and democracy. However I would regard all the above outlined factors as important. I believe that while the Napoleonic wars were not that important as the glimmer of reforms under catherine and alexander as these set the precident for reform while the impact of napoleonic wars were a minor gripe comparitvely as they were in little position to act on this discontent. ...read more.