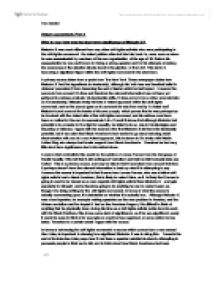 What in your view was the short term significance of Malcolm X?

History coursework: Part A What in your view was the short term significance of Malcolm X? Malcolm X was much different from any other civil rights activists who were participating in the civil rights movement. His violent policies often led him into trouble, none more so when he was assassinated by members of his own organisation at the age of 39. Before his assassination he was well known for being a strong speaker and for his attempts at raising the awareness of the situation blacks faced in the ghettos of the USA. This led to X becoming a significant figure within the civil rights movement in the short term. A primary source taken from a quote from The New York Times newspaper states how Malcolm X 'had the ingredients for leadership', although his 'ruthless and fanatical belief in violence' prevented X from becoming the sort of leader which he had hoped. However the source is from around X's time and therefore the relevant information has not been yet gathered to perhaps evaluate his leadership skills, it does prove to be a rather accurate take on X's leadership. Malcolm firstly did take a violent approach within the civil rights movement, and as the source goes on to comment he was then met by 'a violent end'. Malcolm's end came at the hands of his own people, which proves that he was perhaps too far involved with the violent side of the civil rights movement, and his actions must have been so radical for his own to assassinate him. ...read more.

Therefore I am inclined to agree with the views of this source, because I know that one of Malcolm X's strong attributes was his ability as a speaker. A similar source coming from an educational website informing about the life of Malcolm X and his role in the civil rights movement comments that X became the 'leader of activists' who had believed that non-violent protest would be unable to bring about the desired change for blacks that everybody wanted. This to me suggests that Malcolm X made progress with the civil rights movement, perhaps not in advancing it in a way that most wanted, however he did further it towards equality by his inspiration to other activists and breaking previous commitment to non-violent protest. This is a trustworthy source being that its aims are to educate, and it comes from a website which enables students to read up on information about various topics. I am led to believe this source as I know that X was significant in advancing the civil rights movement. For example his aid in the implication of laws such as the Civil Rights Act 1964, as well as raising consciousness to the situation of certain blacks. A secondary source taken from a school text book highlights the influence that Malcolm X had on the Black people of the USA. The source states that X did a lot to improve the situation for Blacks in America's ghettos, and he 'drew early attention' to the conditions in these ghettos. ...read more.

This suggests that he did very little for the reduction of racial discrimination. However the source is unreliable and may be bias due to it being primary. The source makes X's short term significance out to be very little, and if he were not a Negro then he wouldn't have any influence at all. Whilst I believe this is understandable at that time, when assessed it is clear to see that Malcolm had some involvement in the reduction of racial discrimination. It was due to his and other activists influences that certain laws such as the Civil Rights Act of 1964 were implemented, to stop racism. Although he never directly implemented such laws, his ideas were significant to many other activists, and his ideas were even taken a hold of his rival King after his death. This shows the extent of Malcolm X's short term significance. To conclude, I think that the short term significance was great. Although many had not been attracted to X's ideas of violence and believed he was unruly and dangerous, it can't be disregarded the effect that X had in his use as a strong speaker, and his attempts to take another route towards reducing racial discrimination. In many ways his significance helped to open the eyes of others, for example his work in raising consciousness of the blacks in the ghettos was very influential and brought about certain implementations of laws. Therefore, I think that Malcolm X had great short term significance through his leadership, influence on blacks particularly in northern America, and his advancing of the civil rights movement. ?? ?? ?? ?? Tom Corder ...read more.