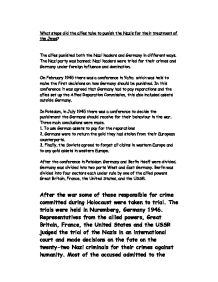 What steps did the allies take to punish the Nazis for their treatment of the Jews?

What steps did the allies take to punish the Nazis for their treatment of the Jews? The allies punished both the Nazi leaders and Germany in different ways. The Nazi party was banned; Nazi leaders were tried for their crimes and Germany under foreign influence and domination. On February 1945 there was a conference in Yalta which was held to make the first decisions on how Germany should be punished. In this conference it was agreed that Germany had to pay reparations and the allies set up the Allied Reparation Commission, this also included assets outside Germany. ...read more.

Germans were to return the gold they had stolen from their European counterparts. 3. Finally, the Soviets agreed to forget all claims in western Europe and to any gold assets in western Europe. After the conference in Potsdam Germany and Berlin itself were divided. Germany was divided into two parts West and East Germany. Berlin was divided into four sectors each under rule by one of the allied powers Great Britain, France, the United States, and the USSR. ...read more.

Some of the most infamous Nazi criminals to be tried were Goring the head of the Nazis force, Jodl Alfred, general, head of the military command and advisor of Hitler in strategic and operative matters. Frick, Wilhelm, was Minister for Internal Affairs. Kaltenbrunner, Ernst, lawyer born in 1903, was head of the Security Police (SD), the leader of Hitler youth Bulder von Schirach and von Papen who had recommended that Hitler should be made chancellor thinking he could control his actions but he was badly mistaken. ...read more.