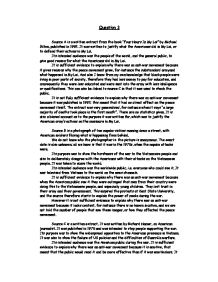 what the Americans did in My Lai source work

It was also made in 1967; this was before My Lai and the Tet Offensive. Therefore this means that Britain was against what the Americans were doing before the peace protests or any of the major attacks even started. However it is not sufficient evidence to explain why there was an anti-war movement because it is only from a British perspective and therefore may be biased against the Americans, depending on the British take on the war. We don't know how many people saw the source; therefore it is difficult to say that it directly affected the protests. Also it was quite a long time before the events or the peace protests started. This means that it would not have directly affected them. Source E is a statement from BBC commentator Robin Day to a seminar of the Royal United Service Institution, in 1970. Its purpose was to inform the public of the power of television, and media in general. But it may also have been to provoke debate between the media and the American army. Its audience was the Royal United Service Institution. There were also members of the British armed forces in the audience. It is sufficient evidence to explain why there was an anti-war movement because Robin Day was well known and a respected reporter. ...read more.

However, a message that is conveyed in more than one source is that the media had a phenomenal control over how the American public reacted in certain situations. They showed images of children being drowned in napalm, and of course there was going to be some reaction from the public. From my own knowledge I can see that the sources do not tackle certain issues such as: Drug addiction. They don't explain how much it damaged the economy or the amount of publicity that it was given, which in turn may have caused the peace protests. The statistics on the number of people killed, and the average age of the soldiers killed (which was 19) may have made parents and families of young soldiers in Vietnam join in the movements. None of the sources tell you about the effects of the Kent State University protests, where some students rioted and the police shot them. Nothing was mentioned about Martin Luther King or John Lennon joining in the peace protests, which would have, if celebrities were doing it, made more people want to join the rallies. The Tet Offensive, "Life" magazine publishings and Operation Phoenix were also never included in the sources. So ultimately I believe that the sources do not provide sufficient information to explain why there was an anti-war movement, but however they do provide a good insight into the war as a whole. ...read more.