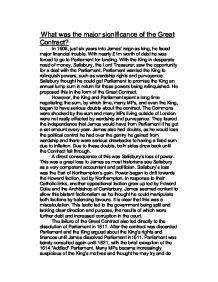 What was the major significance of the Great Contract?

What was the major significance of the Great Contract? In 1609, just six years into James' reign as king, he faced major financial trouble. With nearly �1m worth of debt he was forced to go to Parliament for funding. With the King in desperate need of money, Salisbury, the Lord Treasurer, saw the opportunity for a deal with the Parliament. Parliament wanted the King to relinquish powers, such as wardship rights and purveyance. Salisbury thought he could get Parliament to promise the King an annual lump sum in return for these powers being relinquished. He proposed this in the form of the Great Contract. ...read more.

James also had doubts, as he would lose the political control he had over the gentry he gained from wardship and there were serious drawbacks to having a fixed sum due to inflation. Due to these doubts, both sides drew back until the Contract fell through. A direct consequence of this was Salisbury's loss of power. This was a great loss to James as most historians see Salisbury as a very competent accountant and politician. Salisbury's loss was the Earl of Northampton's gain. Power began to drift towards the Howard faction, led by Northampton. In response to their Catholic links, another oppositional faction grew up led by Edward Coke and the Archbishop of Canterbury. ...read more.

Parliament was barely consulted again until 1621, with the brief exception of the 1614 "Addled" Parliament. Many MPs became increasingly suspicious of the King's motives and thought he may try and do away with Parliament altogether. The corruption of the court and James' obvious favouritism did little to endear him to the Commons. In the long term, this whole episode soured relationships between James and subsequent Parliaments. On the whole, the failure of the Great Contract was damaging to James mainly because of the increased factionalism of the government. This was the most important outcome of the failure of the Great Contract because it led to a government without clear objectives. This reflected badly on James and angered the Commons. ...read more.