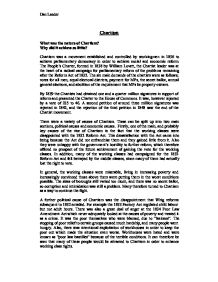 What was the nature of Chartism? Why did it achieve so little?

Chartism What was the nature of Chartism? Why did it achieve so little? Chartism was a movement established and controlled by workingmen in 1836 to achieve parliamentary democracy in order to achieve social and economic reform. The People's Charter, formed in 1838 by William Lovett, the Chartist leader was at the heart of a radical campaign for parliamentary reform of the problems remaining after the Reform Act of 1832. The six main demands of the chartists were as follows; votes for all men, equal electoral districts, payment for MPs, the secret ballot, annual general elections, and abolition of the requirement that MPs be property owners. By 1839 the Chartists had obtained one and a quarter million signatures in support of reform and presented the Charter to the House of Commons. It was, however rejected by a vote of 235 to 46. A second petition of around three million signatures was rejected in 1842, and the rejection of the third petition in 1848 saw the end of the Chartist movement. There were a variety of causes of Chartism. These can be split up into two main sections, political causes and economic causes. Firstly, one of the main, and probably key causes of the rise of Chartism is the fact that the working classes were disappointed with the 1832 Reform Act. ...read more.

Essentially, Chartism was at an end by 1848, after the third petition had been rejected by Parliament. Although a few supporters remained it would never have the same number of supporters as it once did. The reasons behind this failure have been much debated by many historians and there are various theories as to why the Chartists didn't succeed in getting their reforms passed, especially when one contrasts the Chartists with the success of other groups such as the Anti Corn Law League. Most historians do agree however that the main reason for failure was simply because their demands were never going to be accepted by the Parliament of the time and were far too drastic. This was because after 1832 parliament was still dominated by the aristocracy and they certainly did not want to accept reforms that would result in themselves losing power or letting the lower classes gain power and become a threat. A further explanation of the failure of Chartism is the fact that the middle classes either ignored or shunned Chartism. Whilst many were in favour of reform and agreed with much of what the Chartists were fighting for, they were put off by the Chartists' violence, so they would never come out in open support for them and opted to support the Anti Corn Law League instead. ...read more.

These demands mainly came into being by the Reform Acts of 1867 and 1884. It was the 1918 Representation of the People Act, which also gave the vote to women over 30. The only demand that has not been passed is for annual general elections. Additionally, it can be seen that the Chartists were a success as many of the Chartists beliefs have been passed onto other groups, that perhaps follow on from the fight that the Chartists began. The Chartists showed the public that one could stand up to the government. Also, it could be argued that the Chartists showed other groups what not to do. For example, the Anti Corn League learned from the Chartists' mistakes and as a result were perhaps more successful. Also it can be seen that it was the pressure by the Chartists that brought about certain reforms such as the 1842 Mines Act and the 1844 Factory Act, thus showing that Chartism did have some elements of success. In conclusion it can be seen that ultimately the Chartist movement was a failure in the short term as none of the six demands were achieved. There were almost as many types of Chartism as there were Chartists and this was a factor against its immediate success although the movement was significant in terms of the development of working class movements. ?? ?? ?? ?? Dan Leeder ...read more.