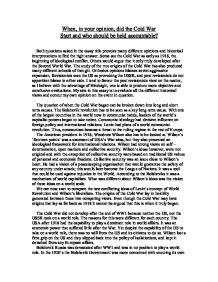 When, in your opinion, did the Cold War Start and who should be held accountable?

When, in your opinion, did the Cold War Start and who should be held accountable? Both questions asked in the essay title provoke many different opinions and historical interpretations to find the right answer. Some see the Cold War as early as 1918, the beginning of ideological conflict. Others would argue that it only truly developed after the Second World War. The study of the true origins of the Cold War has also produced many different schools of thought. Orthodox opinions blames soviet aggressive expansion, Revisionists sees the US as provoking the USSR, and post revisionists do not apparition blame to either side. I tend to favour the post revisionists view on the matter, as I believe with the advantage of Hindsight, one is able to produce more objective and conclusive evaluations. My aim in this essay is to evaluate all the different historical views and concur my own opinion on the event in question. The question of when the Cold War began can be broken down into long and short term causes. The Bolshevik revolution has to be seen as a key long-term cause. With one of the largest countries in the world now in communist hands, leaders of the world's capitalist powers began to take notice. Communist ideology had divisive influence on foreign policy and international relations. ...read more.

Stalin, Roosevelt and Churchill were three dominant personalities who exercised considerable power within their own countries. Churchill played an important role during the war and was able to get Stalin's agreement to recognise spheres of influence by the 'percentages deal', this limited Stalin's actions after the war. Roosevelt played a different role. Roosevelt formed a relationship with Stalin that came under attack after the war. Historians such as D. Donnelly have highlighted Roosevelt's failure to stand firm against Stalin at Yalta as a crucial mistake that allowed Stalin to play on the Gullibility of the West. The death of Roosevelt, replaced by Truman, revisionists have seen the more hard line anti-communist character as a key factor in the development of the Cold War. Truman's iron fist approach caused a rift between the two superpowers. Most members of the US and British Governments saw Stalin as untrustworthy. Therefore a meaningful agreement with Stalin was impossible. Stalin's domestic policies became one where violence was respected appeared to transfer to foreign policy. Therefore the development of the Cold War can be seen as the result of Stalin's personality operating within the particular and unique circumstances in Europe after WW2. When assessing the question of who should be held accountable for the causes of the Cold War, a key character that has to be analysed is Stalin. Orthodox views In the West blames Soviet aggressive expansion, which comes from communist ideology. ...read more.

To the Soviet Government this was little more than 'Capitalist interference'. Even the Berlin blockade was presented by the USSR as a response to the provocative policy of the West in introducing a new currency in Berlin, and the formation of the North Atlantic Treaty (otherwise known as NATO). Revisionist's then argue that Soviet foreign policy was by defensive considerations in response to US actions. After extensive analysis it is clear that the causes of the Cold War are complex but they can be broken down and evaluated. I believe it was a mixture of factors including a conflict of two superpowers ideologies, the personalities of characters playing leading world roles, and the creation of a 'power vacuum' in Europe after World War Two. All contributed to what is now known as the 'Cold War'. Therefore I have to favour the Post-revisionist theories on this topic as they see the situation as so immensely complex that no generalisation about who to blame will suffice. Therefore avoid blaming either side and look at the topic more objectively. I have found that it is hard to apparition blame to either side as there was clearly a series of events with the faults of both the East and West. The final question of 'when did the Cold War start?' has also caused much debate. I believe the origins of the Cold War does lay as far back as the Bolshevik Revolution of 1917 but never truly developed until after WW2 in 1945. ...read more.