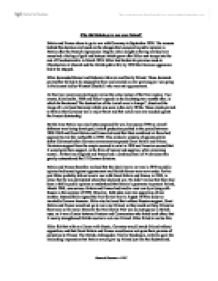 Why Did Britain go to war over Poland?

Why Did Britain go to war over Poland? Britain and France chose to go to war with Germany in September 1939. The reasons behind this decision are based on the changes that occurred in public opinion in Britain after the Munich Agreement. Despite initial delight at having avoided war many had a feeling of guilt and betrayal which grew after Hitler sent troops into the rest of Czechoslovakia in March 1939. Hitler had broken his promise made to Chamberlain at Munich and the British public felt, by 1939 that German aggression had to be stopped. Hitler demanded Memel and Bohemia-Moravia and finally Poland. These demands proved that he had to be stopped by force and created an ever growing pro-war group in Parliament led by Winston Churchill who was anti-appeasement. At this time many were starting to realise the actual nature of the Nazi regime. ...read more.

Britain and France therefore realised that the ideal time to act was in 1939 as public opinion had turned against appeasement and British forces were now ready. For his part Hitler probably did not want a war with Great Britain and France in 1939, in actual fact he was devastated when they declared war. He didn't realise that there had been a shift in public opinion or understood that Britain's guarantee to protect Poland, March 1939, was serious. Britain and France had tried to avert war by allying with Russia in the summer of 1939. However, both sides were too suspicious of one another. Instead Stalin signed the Nazi-Soviet Pact in August 1939 to delay an inevitable German Invasion. Hitler also believed that without Russian support, Great Britain and France would not go to war over Poland, as they could not help Poland as they were so far away. ...read more.

World War would have been permanently averted or perhaps by delaying until 139, Britain re-armed enough to defend herself in the Battle of Britain in 1940. It is impossible ultimately to judge which action would have had the best outcome for Britain. In conclusion Britain went to war over Poland not only because it had to stop Germany's aggression to other countries, but also because it was the best time to do so. The British and French armed forces were reaching the peak of rearmament and air defences were strong. This helped to turn public opinion in favour of stopping the aggression by Hitler, as there was less fear of bombing and a greater awareness of the need to stop Hitler's aggresion. Overall had Britain and France not have acted then the outcome of the Second World War may have been totally different as they may not have had the strength to stand up to Germany's ever increasing armed forces. Ramesh Kanesan - UVC ...read more.